Auburn at Vanderbilt, a History Lesson

Share All sharing options for: Auburn at Vanderbilt, a History Lesson 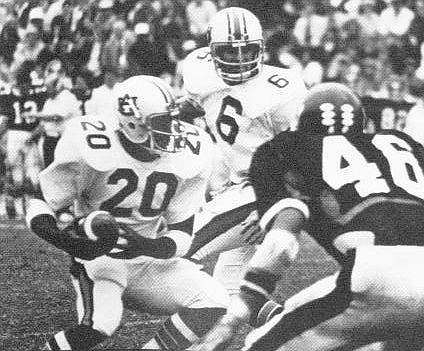 Joe Cribbs had the best Auburn day ever, against the Commodores

.....War Eagle, Auburn Tigers! I hope everyone is having a good Wednesday! This week, the 4-1 Auburn Tigers will travel to Nashville, Tennessee, for a 5:00 PM ESPN tilt with the Vanderbilt Commodores. In the first half of college football existence, Auburn was regularly trounced by the Commodores, nearly always playing on the road; in locales such as Montgomery, Nashville, and Birmingham. Prior to the hiring of Coach Ralph Shug Jordan, Auburn was 6-18-1 against the Commodores, having never played the game in Auburn.

.....In 1951, Vanderbilt came to Auburn, and was beaten by Jordan's first team, 24-14. This loss resulted in the Commodores not scheduling Auburn in the regular season for another 27 years, till 1978. The Commodores and the Tigers did meet in the bowls, in the 1955 Gator Bowl, after Tennessee refused to play in the game. Auburn lost, 13-25, in that game, but they have not lost to Vanderbilt since. For ESPN Gameday to pick this week's game, in Nashville, for a live show, it SURELY must be a sign of the Apocalypse! Vanderbilt is flying high, this year, at 4-0, 2-0 in the SEC. They LEAD the SEC Eastern Division, at the end of September. And they're doing it while ranking LAST in the SEC, in both total offense, AND total defense!

.....Since that last loss to Vandy, 53 years ago in the Gator Bowl, Auburn has visited Nashville 6 times, and won every time. Half have been blowouts, half have been nail-biters. NEVER, have the Commodores had a winning record, going into those games. NEITHER, has Auburn had such a questionable offense! With the specter of such an unprecedented game staring us in the face, it's time to review the history of Auburn in Nashville, in the past 50 years.

1978 signaled a renewal of the series after a 23-year drought.

The situation: Vandy was 1-3 in Fred Pancoast's last season, en route to giving up an astonishing 418 points in 11 games, and a 2-9 record. Auburn was 3-1, coming off a gut-wrenching 17-15 loss to Lou Saban's Miami team. Auburn had taken a 15-14 lead with just 30 seconds left, but gave up a field goal drive at home, to lose. In addition, there was a lengthy NCAA official "letter of inquiry" sitting on President Harry Philpot's desk.

The game: The buses, team, band, and fans left Auburn on a sunny, 82-degree morning. The game in Nashville, on Saturday night, was played in bitter, blowing 38-degree temps on the field.

1986 was a foregone conclusion.

The game: A sunny Saturday afternoon contest was over early, as Auburn scored 14 points in the first minute and six seconds of the game. Brent Fullwood rushed for 145 yards.

1991 was a time of hope for the Commodores, and a time of desperation for Auburn.

The situation: The Tigers were being assassinated in the press, by former defensive back Eric Ramsey, and his lawyer Donald Watkins. Worse, after a 3-0 start, the Tigers had been dominated in Knoxville, and lost a stinker of a 10-9 home game to Jeff Bower's first Southern Mississippi ball club. It was a night game in Nashville, the leaves were turning, and a cool wind blew. Vandy was a dismal 1-4 under their new coach, former Notre Dame alum Gerry DiNardo, but there was a new attitude on the Commodore team.

The game: An angry Auburn team roared out to a 21-3 second quarter lead, then new Vandy coach Gerry DiNardo decided that Auburn's redshirt freshman walk-on, former nose guard, running back Joe Frazier was NOT going to beat them. The Commodores shut down the Auburn running attack, and Auburn fans listened to one of the worst dropped-ball fests in Tiger history. "Through his hands!" we heard, over and over again, from the legendary Jim Fyffe. The Commodore I-bone churned out first downs, and ate up yardage. Finally, in the 4th quarter, Vandy scored again, to take a 22-21 lead. Auburn's situation looked hopeless.

The result: Somehow, some way, Auburn scratched their way down the field on a desperation drive, under the stellar leadership of quarterback Stan White. On the very last play of the game, senior Jim Von Wyl hit a field goal, to lift the Tigers to a narrow victory, 24-22.

1993 was played under a TV blackout, again at night, at Vandy.

The situation: Auburn was flying high, at 4-0, under new coach Terry Bowden, but the offense could do NOTHING in the first half. Auburn was on probation, and not allowed on television.

The game: Vanderbilt ground the ball with their I-bone. While there were only modest results, the Commodores ate clock. DiNardo loaded the box, and Auburn's big runners James Bostic and Stephen Davis, could not get going. Auburn's lone first half score was off a Brian Robinson interception return, and the Commodores led 10-7 at half.

The result: Vandy could not add to the lead. In the third quarter, on 3rd down back in Auburn territory, Stan White threw a hitch pass to Frank Sanders well short of the first down, but Sanders out-maneuvered 3 Vandy defenders, and took the ball some 60+ yards inside the Commodore 5, before being dragged down. Auburn took a precarious 14-10 lead, on a 1-yard Bostic run, but Vandy came roaring back against a tired Tiger defense. Vandy achieved first and goal at the 3 yard line, and quickly made it inside the one. The Tiger defense rose up with a goal-line stand for the ages, and held off Vanderbilt, for a 14-10 win, en route to a perfect 11-0 season.

2001 was another night game in Nashville, unseasonably warm, and both teams came in desperate for a win.

The situation: Vandy coach Woody Widenhofer, for the second year in a row, had GUARANTEED a bowl trip for the Commodores, but had started 1-2, with an ugly loss to Middle Tennessee State. The Auburn offense had been gutted by the early departures of Rudi Johnson, Heath Evans, and Ronney Daniels. Auburn was coming off an embarrassing 31-14 loss in the Carrier Dome to James Mungro, Dwight Freeny, and the Syracuse Orangemen.

The game: True freshman Carnell Williams got loose early in the first quarter, for a 51-yard touchdown run in the dark in Nashville, but the Auburn offense bogged down quickly thereafter. Vandy's veteran offense pounded away, and moved the chains. Behind the timely passing of senior Greg Zolman, and the shifty running of freshman Lew Thomas, Vandy kept chipping away. Vandy tied it in the third quarter with a short Thomas run, Jason Campbell bombed a TD to Robert Johnson to put the Tigers back ahead. Thomas scored again for Vandy in the third, Carnell Williams answered as the third quarter came to a close, 21-14 Auburn.

The result: Greg Zolman would hit receiver Dan Stricker for the tying touchdown early in the 4th quarter. Auburn would answer with about five minutes left, with a LONG 49 yard field goal by Damon Duval. Clinging to a precarious 24-21 lead, Auburn tried to hold off Vandy. Veteran fifth year senior Greg Zolman led the Commodores from their own 20, relentlessly down the field, to a 4th down at the Auburn 26 yard line, with 42 seconds left. In the biggest brain-fart in Commodore history, Woody Widenhofer lifted his 5th year senior QB, AND his running back who had 172 yards on the day. Instead, Woody put in two walk-ons, to run a fake field goal. Walk-on holder Justin Purkey tried to run with it, and lost two yards, to preserve a 24-21 Auburn victory. Vandy would slide to 2-9, and Woody would resign.

2003 featured a game that was played early, on JP Sports, under a hot early September sun in Nashville. As usual, if there's something wrong with your SEC team, playing Vanderbilt is the cure!

The situation: The Vandy Commodore team had a 1-1 record, fresh off a blow-out win over UT Chattanooga. Auburn was in dire straights, after scoring only 3 points total against Southern California and Georgia Tech.

The game: featured more doldrums early, from both teams. Auburn had hired Zeke Bartkowski, as a consultant, to spice up the tepid Nall-ball offense. There was a plethora of new formations and shifts, but it was the same old 3 yards and a cloud of dust, in reality. The coaches were afraid to let Jason Campbell do much. Finally, early in the second quarter, Campbell hit Jeris McIntyre on a 31- yard strike, and the Tigers were off to a 17-0 halftime lead.

The result: Jay Cutler would try to make a game of it, with an early third quarter wounded-duck 39 yard touchdown pass to Erik Davis, but Auburn would counter with a steady pounding of backup runners. Ronnie Brown, Brandon Jacobs, and Trey Smith would grind the Commodores into submission, 45-7.

Observations on 2008: 1978 excepted, Auburn has struggled in Nashville at night, this half-century. The sun will be down in this week's game, by the second quarter. Sunlight has been no problem for the Tigers in the Music City, so first quarter points will be at a premium! As with Tennessee, lobbed throws deep into the secondary will be a BAD idea for the Tigers. Vandy's secondary is their strength, and they lead the SEC with ten interceptions. Vanderbilt is tenth in rushing defense. Here's where Kodi Burns can help us! Furthermore, Vandy is LAST in passing offense, and they face Auburn's number one sacking defensive unit.

.....Will we survive another Tiger scare in Nashville at night? Or will the Tigers roar to victory? We'll find out Saturday, at 5:00 CDT. War Eagle, everybody, and have a great Wednesday!