Share All sharing options for: A Little Game Day Reading 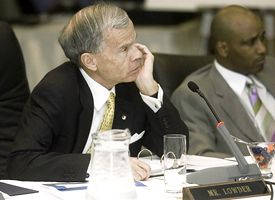 Before I make the trek down I-85 for today's game, I thought I might throw up a link to a column that appeared on the Florida Gator blog Orange and Blue Hue this week about the sorry state of Auburn's football program and it's continual struggle to free itself from the grasp of Bobby Lowder. It's got some pretty heavy accusations in it, so take it with a grain of salt.

While detailing our recent history from the fall of Dye through the hiring and firing of Terry Bowden, the writer, Keltic Gator, doesn't notate where he gets any of his information. On the surface, some appears to be valid, some appears to be a stretch, and some I just don't know.  Read it and decide for yourself--it's a lengthy article, it'll take you a few minutes. At the end, he calls us a "second-tier academic institution", but he likes to take the occasional pot-shot at us. If you recall from last year, he's the one that wrote a scathing column on our fall from prominence right before we went down there and beat them at their house. I believe he still has a few pounds of crow left in the freezer that's he's yet to consume...