Tommy Bowden Out at Clemson

Share All sharing options for: Tommy Bowden Out at Clemson 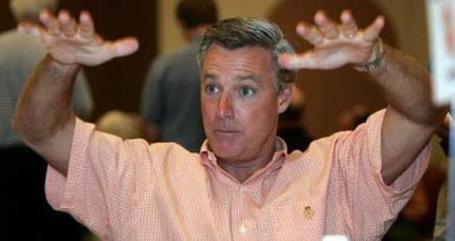 Why yes, the sky did fall. Why?

It is confirmed that coach Tommy Bowden is out at Clemson, as was broken by some of our readers. Don't you guys go eat lunch or something? Bowden had this to say:

"Terry Don Phillips approached me this morning and we agreed that this is the best solution for the direction of the program," said Bowden. "Clemson has been very good to me and my family. Both of our children are Clemson graduates. I appreciate the opportunity Clemson University gave me and the support of the administration while I was here. I also want to thank all the student-athletes and coaches who worked so hard for this program the last 10 years. I wish Clemson University nothing but the best in the future."

What was I just telling Auburn Tiger fans, be careful what you wish for? The telling thing is that I don't think Clemson was having as disappointing year as we did in 2003. Granted, one could argue that the palace coup in Hartwell was bloodless and successful, but you know what I mean, right?

I think we Auburn folk should keep an eye on the Tiger Paws and see how the rest of their season plays out so we can remind ourselves how much havoc that instant gratification of firing a coach mid-term actually wrecks on your team. We just did our OC, and they upped the ante...

Can you believe that Muschamp's name is getting floated early?