Tommy and the Fans

Share All sharing options for: Tommy and the Fans 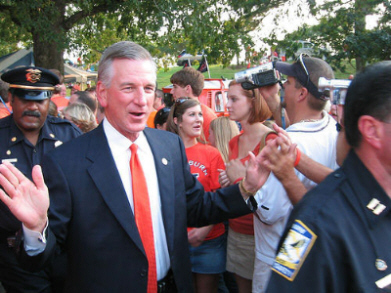 I have been coming to this site for years, when it was just Jay’s site, for the short lived national publication project, and before it was part of the SB nation.  Jay works really hard to give you and me the information about what is going on, on the Plains and even some thoughts on them.  Bringing in War Eagle Atlanta and Acid Reign were good additions, and they add great insight as well.  This is my third piece here, and I hope to do more.  Although I have wanted to comment for years, I have just now gotten the ability to speak out.

Everyone gets frustrated… a friend of mine that is a grad is really down.  I can feel his pain; both of our teams are struggling.  The difference is that he knows it is just a transition year, and Rich Rodriguez will have them back up and running.  I have not heard one Wolverine fan calling for his head, yet ESPN posted an article here about their troubles.  Why would fans want Tuberville’s head?  He is arguably the best coach in Auburn History.  No disrespect to Shug, Heisman, and Dye but Tuberville has made huge strides in creating as an SEC Power.  Why can we not look at this as it is just one down year?

We have gotten a good deal of respect by the pollsters since 2004.  This year is a great example of that.  We lost to

Miss St
and then Vandy and still stayed in the Top 25.  Anyone who actually saw those games knew we were not even in the same hemisphere as the Top 25, but somehow there we were.  That is a sign that things are okay at .  If was not a quality program then the pollsters would forget about us.  Where do you think that quality came from?

What is my point?  Well, just because Clemson fired Tommy Bowden does not mean that Tuberville should be even more on the hot seat.  Bowden cannot hold a candle to Tuberville.  Tuberville has made mistakes at , there is no doubt about it, but when the chips are down and needs leadership he is there.  has a great program, not even a hint of NCAA problems.  If I am not mistaken, graduates a better percentage of its football players than any other SEC school.  That is something to be proud of.

Why are droves of people coming to this site, and screaming and complaining about Tuberville?  I do not get it.  I realize that plenty of Bama fans come over here and to get things started, and that is fine.  If I was a Bama fan, I would want Tuberville gone too.  But some of the people who I have grown to respect there opinion just by reading their comments are starting to disappoint me.  Winning 10, 11, or 12 games a season cannot happen every year.  No one pulls that off in a power conference.  Also, I read some of the comments and it seems like people are scared of what Saban is doing at Bama.  I think it is great, now when we beat them (no matter if it is again this season or the next or the next), we cannot hear the same excuses we have gotten for the last 6 years.  Saban being the great recruiter should only make the Auburn Coaches work harder.  Maybe that is what we need.

Rumors are flowing everywhere on Wednesday about Tuberville agreeing in principal to step down at the end of the season due to health issues.  I can only guess it is his neck acting up again.  He had surgery on it a few years back.  Others are saying that Clemson is in talks with Tuberville.  The stepping down is at least possible, the Clemson rumor I just cannot see happening.   I hope that and our fans see the light and give the guy a break.  He is OUR coach; he is going to get things back again.  Faith people… that is all we need.  We have a lot of young talent; he will develop them into men.

Lastly, Tuberville might be better suited to be an Athletic Director as he ages, but currently he is our coach, and I am proud to have him.  Whenever he decides to move up the ranks, which in my opinion is not too far away.  I hope that will listen, our Board of Trustees would have to have a shakeup to even entertain that option though.