Share All sharing options for: Auburn Sinks in Appalachia 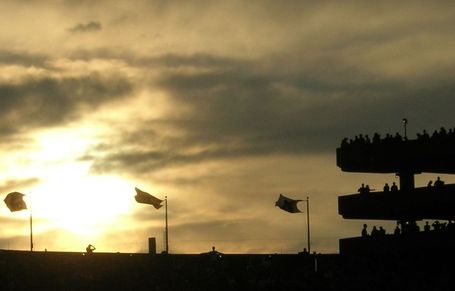 Is the sun setting on the Tuberville administration?

War Eagle, everyone. The Tigers fall for the third week in a row, 34-17, to the West Virginia Mountaineers. Despite building a big 17-3 second quarter lead behind a strong running game, Auburn melted down the stretch. West Virginia had little success trying to stop Auburn's power running attack in the first half, but again, as we have all year, we abandoned the successful offensive game plan in the second half, and went nearly exclusively with the shotgun. Auburn failed to produce a single second half point. On defense, for the second game in a row, Auburn was gashed for over 400 yards, this time, much of it came on the ground. If it hadn't been for a pair of first quarter West Virginia turnovers, this game could have yielded 600 yards against our defense.

It was exciting, seeing Auburn run from the I-set again, and pick up yardage. The sprint handoff, bootleg the other way offense has been time-proven ever since the first days of the forward pass. Auburn exploited the dual-threat throughout the early going, but abandoned it completely in the second half. Worse, the offensive line fell apart in the latter going, showing an inability to even deal with a three man rush. Auburn failed to even take a shot at a wide receiver pass down field past the 1st down stake, in this game, despite trailing much of the second half.

On defense, Auburn had opportunities on the D-line, but failed to wrap up often. The linebackers had a great effort, but made a few mistakes. Our corners were generally good, but Auburn's safety play was nearly non-existent. Auburn's two safeties have become nearly invisible, neither covering, nor making tackles. We're really searching for answers, once the play moves past the line of scrimmage up the middle. Kudos to Paul Rhodes for dialing up a few more blitzes. We did have some success on them, and lately, our D-line has needed the help to get pressure on the quarterback. Rhoades is trying to play to his strengths. We've just GOT to get better in the middle of the defense, on the back seven.

Special teams continue to be a mixed bag, with a few spectacular plays, and a few bad ones. Overall, we're more solid here than we were a year ago, but we need to get even better.

Defensive Line: C. It was the best of times, it was the worst of times. At times, the middle was stuffed, and the outside contained. At times, we were woefully out of position. This year, we have not been able to get a 4-man pass rush going against any quality opponent. Overall, it was an average performance. Against a dangerous offense like the Mountaineers have, we needed to win convincingly up front. We did not.

Linebackers: C. There were missed tackles, and some busts in alignment and gap control. Still, these guys played hard, and were probably the best defenders on the field at actually wrapping up and bringing a loose runner down. If we just had 3 healthy Merrill Johnsons to put out there, we'd be one of the best defenses in the nation. Still, when you can't put a 170 pound back on the ground on those 3rd and 2 calls up the middle, you've got problems at middle linebacker.

Secondary: D+. I REALLY hate to give a grade like this, when our corners played pretty well. It wasn't always perfect, but Powers and McFadden came to PLAY. They did pretty well, locking down the outside. Our safeties were pitiful. PITIFUL! Bad technique, bad position, bad decisions. How did it come to this? As much as I cussed him five years ago, I would KILL to have Will Herring back there, right now. At least he would hit somebody, and didn't play scared.

Punting: C. Durst had a couple of good towering, deep shots, but had a couple off the side of his foot, too. Overall, it was probably his worst effort of the year. Considering field position, it was still decent. Would that every Auburn player's “worst effort” was this good. We might still be in the BCS picture.

Punt Returns: C. Only had one punt to return, all night. Chris Slaughter did field it in traffic, and fall forward for a yard. Not good, not bad.

Kickoff Returns: A. Had SEVERAL good ones! Nice blocking, nice avoidance of penalties, good decisions. Some folks might say that a ball kicked off into the endzone should always be downed, but with the coverage having to cover from the 30, and you've got burners like Davis and Fannin, bring it out. Get it upfield! Especially the way our offense is playing... Points off on a couple of bad cut/running decisions.

Kickoffs: B-. We failed to kick it inside the ten, this game. Wind had a bit to do with it, though. We held 'em under 20 yards per return, which I'll take any day, with the 30-yard line kickoff against dangerous return men!

Place Kicking: B-. Folks were howling over Wes Byrum's single miss, tonight. Coupled together with his season-long performance, another hooked effort didn't look good. Still, I don't count off terribly for 40+ yard misses, especially in the cold wind. On the other hand, we needed it BADLY at that point, and didn't get it.

Offensive Line: D-. I give a barely passing grade on good first quarter run blocking. Still, guys, we DO have to play four quarters. Pass blocking against the 3-man line was absolutely AWFUL. AWFUL! Did I mention, AWFUL? In the second half, this was EASILY the worst offensive line performance of the Nall/Tuberville era. We seem to have totally forgotten every basic pass-blocking technique in the book. HOW does a nose guard blow past three blockers in the middle, repeatedly? HOW are we going to deal with Terrence Cody next month? Wow. Just... wow. I would have NEVER expected a Hugh Nall line to play like this... If they're sandbagging because they don't like Kodi, bench 'em, Nall. We CAN'T have this!

Receivers: C. Auburn's guys out here were basically expected to block and run short routes, which they did, for the most part, decently. Tommy Trott, in particular, had probably his best receiving game. Of course, there were letdowns, too. No one got open deep. Montez Billings fell down untouched on a botched reverse, killing an early drive. Tim Hawthorn had an ugly drop on a clutch 3rd down play that would have kept the game in reach. We need help, here, badly. Rod Smith graduates, this year, and what will that leave us?

Backs: C. We ran pretty well, when we had the chance. NICE play on the wheel route to Tristan Davis, at fullback. Of course, typically for this year, we didn't try it again the whole game. Great screen pass reception for the score by Brad Lester. Pass blocking was poor. No, worse than poor. We tried to dance with 300 pound linemen, and got run over. Gotta cut those guys. You're not going to win on your heels, straight up, against those guys, when you're outweighed by a hundred pounds.

Quarterback: B-. Burns missed some throws, and made a bad read or two on the option. Still, he played well enough to win. Shifty, tough running, and some good throws. Our blocking in the second half gave poor Kodi NO chance. He threw up a wounded duck at the end, but it WAS 4th down. Our blockers couldn't give him enough room to set up against a three man rush.

Much has been made over the failure of the Auburn offense, this year. Who to blame, few can agree. Was it Franklin's overly ambitious scheme? Was it poor position coaching? Many fans are clamoring for a house-cleaning, there. Receiver play has been substandard since Aromashodu/Mix/Obamanu left after 2005. The worst failure, though, this year, has definitely been on the offensive line. Frankly, we just can't put a complete game together, here, this year. This was supposed to be a star OL, this year. Instead, we can't make line calls, can't come up out of our stance, can't get the snap count right, and can't man up in the middle. If we can't block a 3 man line, we won't even be able to handle UT Martin at Homecoming. The line MUST improve, if we're to have any chance!

On defense, I think our worst problem is a lack of ability to pursue at safety. We're not as strong up front as in the past, but the glaring weakness is guys with the ball running loose in the middle. We need to find guys that will run, come up and HIT, and wrap up in the secondary. Our current safeties ARE NOT getting it done, and it's KILLING us in the clutch. The old Sophomore Slump is definitely alive and well, in our back seven.

It's great to be an Auburn Tiger! All we can do at this point, is to work harder. I still think Ole Miss and UT Martin are beatable. It would be a danged shame to lose both of those, and bottom-out to 4-8. I still think we can get to the Pizza or Weedwhacker bowls, IF we pull together and improve. We've got a long week to get ready for a trip to the Grove. As a manager with 22 years of experience, I have reached a few opinions on the current coaching staff and the current administrative state of affairs. More on this, over the weekend, when I get more time. For now, War Eagle, and good night.