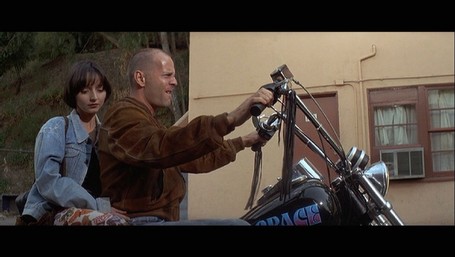 You don't know how pleased I was to see us line up with two backs and two tight ends to start the game Thursday night. I thought for just a second that we were really going to make an attempt to revert back to the basics of power football. I jumped for joy when Kodi lined up under center in that first drive and we then proceeded to not only run the ball, but throw in a few passes--to the tight end of all people. Brilliant! Granted, that first drive stalled after three straight running plays up the middle. Why not try and run at least one to the outside? Okay, fine. We took the three points. An impressive drive for us, all things considered.

But there was more to come, after Pat White threw his 2nd pick. Another impressive drive, this time capped off with a TD--from a screen pass, no less. I thought we forgot how to throw those. Did we even manage one against Arkansas? And more rushes to the outside--with pulling linemen, too. Couple that with another blocker from the backfield and the runner has time to wait for his blocks to develop, then cut back. Yards are gained. It definitely made more sense than running one lone back up the middle out of the shotgun like we've been doing to no avail. And QB bootlegs and roll outs are twice as effective when you have two backs going the opposite direction--not to mention that all of this ate clock--a lot of clock.

Cut to our next drive, another solid effort, culminating in a touchdown. Then cap it off with a bit of trickery, the onside kick, one of our Thursday night traditions. We got these guys on the ropes! But no, we get a little conservative and go three and out. We could have had a knock-out blow with another TD. We end the half with blown coverage giving them a 42 yard TD pass, one of roughly six plays they had over 30 yards, eerily reminiscent of the Arkansas game again. But overall, a very solid offensive performance to start things out.

So what do we do in the second half? Perhaps a second helping of what we did in the first? Uh, no... Seemingly, we try to re-implement our version of the spread again, also known as the spackle. Sure, defenses are going to make adjustments, the offense can make them, too. But don't throw out the entire playbook you just used and go back to what you know is going to fail.

We're desperate for some offense. We have to keep it simple. Our personnel is not suited for the spread, especially since no one is around to coach it to them any longer. They've had a tough year, but all of these guys know power offense. We can do it. We just have to stick with it. Run our stable full of backs. Let Kodi run. Throw in some passes. Tight ends and screen passes are good weapons to choose. Chuck it long every so often--it opens things up. We attempted virtually no long balls against WVU. Why?

But here's what I'm advocating: I'm sooo tired of this. Let's scrap this spread once and for all. We don't need it, it's NOT us, and it's not Tuberville. It's a failed social experiment, like giving mortgages to poor people. We've had to write-off our season now, like a portfolio of mortgage-backed securities hawked by Wall Street. Face it folks, we're in foreclosure. Can't we file it under lessons learned and move on with our lives? Why did Tubs feel pressured to try it out in the first place? Sure our offense had waned in recent years, but you change OCs, not your whole way of life. Why is everybody so pass happy anyway?

What's wrong with the run being your primary mode of attack? Anybody notice what Paul Johnson is very quietly doing at Georgia Tech this year? Granted, it's still early, but he didn't decide to change up his entire offensive philosophy just because he moved to a team with considerably more talent than he had at Navy. Who says it has to be pass, pass, pass? I'm considering going to watch them play Virginia tomorrow. They still have plenty of tickets available--at the box office. It might be fun to watch a team again that knows how to run the ball--a team with less talent than we have, BTW.