A Defining Week for Auburn Football

Share All sharing options for: A Defining Week for Auburn Football 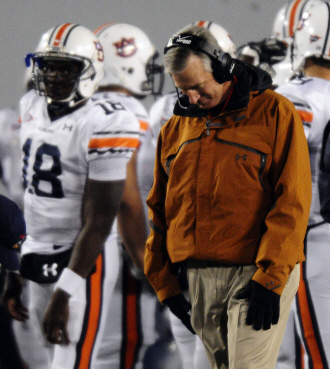 These are not the best of times for Tommy Tuberville.

Good morning and welcome to week nine of the great collapse of 2008. If you haven't lost your money already, you've certainly lost your team. Auburn begins this week with what is probably its biggest game of the year - and for all the wrong reasons.

With four games remaining and two against top 10 opponents, Auburn's only real chance of reaching Shreveport or some other dark destination is stealing a win from Houston Nutt's Ole Miss Rebels. I shake my head just writing that sentence.

When the odds are posted this morning, Auburn will be an underdog. The Rebels won a squeaker over Arkansas on Saturday, 23-21. Both teams will bring in matching 4-4 records overall and both are 2-3 in conference play.

After giving the Auburn players the weekend off, Tommy Tuberville held a late evening practice on Sunday. The focus this week will be on how to play four quarters, something that's eluded the Tigers all season. Somebody joked over the weekend that Auburn is the top ranked team in the country through two quarters. Sad but true.

Coaches and players are having a hard time explaining the second half failures. "We just have to play a full game, four quarters, and find a way to finish so we have to just keep getting better," says center Jason Bosley. "We just have to take the next step and play four quarters instead of two," he says. Thanks for stating the obvious.

The Tigers have owned Ole Miss in recent years, winning the last four games and seven in a row in Oxford. The game kickoffs at 11:30 a.m. CT from Oxford, Mississippi and will be televised by Raycom Sports.

Today's column appears at Talkin' Tigers.com. If you subscribe, it should already be in your inbox. If you don't see it, be sure to check your spam folder. Don't forget to sign your friends up if they are not already members.

Below is a story that was written for Talkin' Tigers last week. We had a glitch and many of you did not receive it. I want to run it again because it's a great story about three Auburn graduates who live in Hollywood and spread the Auburn spirit through a variety show that's on radio stations and podcasts across the country. It's an interesting read.  Check it out here...

Southern California is not the first locale that comes to mind when talking about Southeastern Conference football. In Hollywood, it's a safe bet that few know the difference between Tommy Tuberville and Tommy Bahama. So what's a group of Auburn fans in Tinseltown to do come football season?

Stacy and Tommy Smeltzer, along with friend, Lynne Hatcher are three Auburn graduates living in Hollywood and working hard to spread the Auburn Spirit to displaced Tiger fans all over the world. What started as three friends gathering in Los Angeles to watch Auburn football games has grown into a widely popular, syndicated weekly variety show that's available on iTunes and Podcast Alley, as well as on Wings FM 100.3 in Auburn during morning and afternoon drive times on Fridays throughout football season.

Hollywood Tiger Mafia, as the show is called, originated from couch conversations that took place during Auburn games. "Hollywood is such a different place from the South," said Stacy ('87). "It's not traditional. We don't have anybody to commiserate with; people here don't care about Auburn football.

"Before the 2002 Iron Bowl we decided to invite Lynne ('86) over to watch the game," she said. "I remember her saying, 'I'd be happy to come over for the holiday'. We knew exactly what she meant.

"So from there, the three of us started getting together to watch all the Auburn games. We dress up and have themed parties such as serving pork when we play Arkansas or upscale fine dining when we play Vanderbilt. We have a lot of fun with it."

Stacy said it was Lynne's idea to start the variety show. "We'd crack jokes all through the game and couldn't stop laughing," said Stacy. "One day, Lynne said, 'you know we're funny. We should do a show.' So I just kept pressing after that until we finally did it."

As you may have guessed, all three are in the entertainment business. Tommy ('87) does voice-overs and acts while Stacy is a broadcast producer, putting together numerous television ads. Lynne is also a noted actress. So it wasn't a stretch for the trio to go from laughing at one another's jokes to making it happen in the studio.

Tommy's voice may sound familiar. Prior to moving to Los Angeles in 2001, he was the voice viewers heard as a show was concluding. "I was the 'coming up next on TBS' guy," said Tommy. Listening to him, you can understand why. He has the classic read-over voice, never imagining that he attended Auburn and hails from Columbia, South Carolina. He's also appeared on camera in episodes of Boston Public and Charmed.

Doing a weekly show in the studio brings back a lot of memories for Stacy and Tommy. They met while working at WEGL, the student radio station on campus. Tommy was the station's production manager, responsible for training all new on-air talent. Stacy wanted to be a DJ. The rest is history. "I remember laughing when I heard his last name," Stacy said. "It sounded so funny.  Little did I know what the future held."

Listening to Hollywood Tiger Mafia, you realize immediately this is not an amateur production with a group of friends sitting around the laptop computer. The quality is as good as any program you'll hear from any source. Because of Tommy's line of work, he has a studio built into his home that comes in handy on Tuesday nights when the show is taped. "I wanted to raise production value and not sound like many of the other podcasts out there," Tommy said.

So how does a show come about and how long does it take to put together?

"After the game, we sit around and ask questions like, 'how are we feeling?' and what's the scuttlebutt going to be this week," Stacy said. "Most importantly, we ask ourselves how we can make it funny. Finally, somebody will throw something out that works.

"One of us will write a script and send it around by email and we'll mark through it and make suggestions until finally we are satisfied," she said. "Lynne is our Auburn encyclopedia. She knows everything about the school. If we have a question about someone, we ask her."

Following the Tennessee game a few weeks back, Stacy noted that, "Auburn people were down even though we won the game." From that observation came a hilarious parody using Dr. Phil as a character examining why Auburn fans felt down even after beating rival Tennessee. Rich Little has nothing on Tommy. He nailed the impersonation.

All three friends gather in Tommy's studio on Tuesday night for the big taping. Once completed, the production work is done and the tape is sent to Wings FM and loaded onto iTunes and Podcast Alley. Finally, another week in the books. A show can take up to 20 hours to write, edit, tape and produce.

Lately, the program has taken on a family feel with son Nathan, 13, taking part in the show. Stacy says they are doing their best to raise him as an Auburn fan. "We make him wear his Auburn jersey," she said. "One time when he was grounded and couldn't watch television, we let him watch the Auburn game. We're doing everything we can to make him a fan. Who knows, he may go to Auburn one day."

During a season where there's been little to smile about on the Plains, three Auburn fans who are more than 3,000 miles away are doing their part to make everyone smile a little more. For that, we should all be thankful.