Who's Flying This Eagle, Anyway?

Share All sharing options for: Who's Flying This Eagle, Anyway? 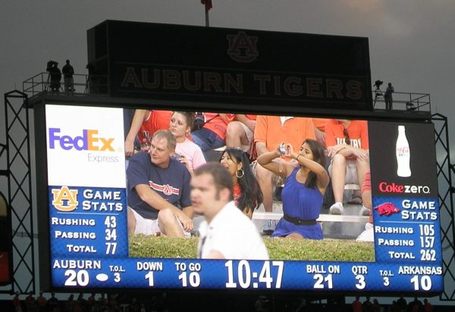 War Eagle, everybody, on this fantastic, brisk Tuesday morning! FEELS like football weather, doesn't it? Here we are, with the first frost of the season, reveling in an undefeated season, and getting ready for another SEC West-clinching trip to Oxford, much like glorious 2004!

I must have been dreaming, huh? Instead of winning the West like everyone predicted, we've got a season on the brink of not even qualifying for a bowl game. How did it come to this sorry pass? Injuries have surely played a part. Implementing a radical new offense proved to be too daunting a task. Still, more than anything, it's been a year of strange, strange decisions from within the Auburn football program. While my first reaction to the Paul Finebaum/Tony Franklin interview was one of relief, Franklin's tales added more weight to a gnawing suspicion that something is not right, with the management of this team.

First off, there came the decision to fire Al Borges. From Tuberville's statements, it looks the decision was made in a 20 minute meeting. This week, Tuberville has finally revealed that the reason was a lack of skill-player recruiting under Al Borges' offense. This does make sense, as we've had a walk-on as our main go-to receiver, for two years running, now. Still, evaluation of recruiting results is ongoing. Every year, Tuberville tells us that he's tickled pink with his signees. No mention of “well, we needed more wide receivers.” Did Tuberville ever inform Al that he was not performing to expectations on the recruiting trail? Did Al get a chance to rectify the situation? Seems to me, that a recruiting deficiency is a staff-wide problem. One would THINK, that the wide receivers coach would be at the top of the blame list, too.

The Arkansas hunting trip, and speculation over Tuberville leaving at the end of last season was very poorly handled, without question. No one seemed to be on the same page, at all. Those who WOULD make a statement during those turbulent days, seemed not to know what was going on. Jay Jacobs' “as far as I'm concerned...” statement was not the sort of thing you expect to see out of your athletic CEO, to be sure.

We may never know what really happened between Jay Jacobs, Tommy Tuberville, and Will Muschamp. Whatever it was, we lost a tremendous coach to Texas. Will Muschamp was CLEARLY irritated at what went on.

The decision to trade in Al Borges' methodical offense, for a wide-open, quarterback-centric scheme was a HUGE gamble. Both Tuberville and Franklin swore that it would work, and we enjoyed our best offensive day of the year in the Peach Bowl. However, much of that had to do with a total lack of preparedness, or ability to adjust, by the Clemson defensive staff. After the bowl, though, there HAD to be concern. A spread will not work, if the quarterback cannot deliver the ball accurately. Kodi Burns, as good a runner as he is, still had (still HAS) serious problems with his throwing mechanics. Behind Burns, we had Neil Caudle, who's basically been unable to play due to myriad injuries, since he's been at Auburn. The decision was made to hedge bets, by bringing in a junior-college spread quarterback, with a known damaged throwing arm.

A quarterback race was allowed to brew throughout the entire off-season, and it did neither quarterback any favors. Chris Todd was denied the chance to get healthy, and Kodi Burns was denied the many reps he needed, to become a good SEC quarterback. In addition, the vast differences between the play of the two, forced the entire offense to play differently depending upon who was calling the signals. Throughout all of this, if Franklin is to be believed, Tuberville sat quietly by, saying nothing.

All the offensive blame does not fall on Tommy Tuberville, though. Franklin obliquely indicted the long-time Auburn assistants, indicating that maybe they didn't want to teach the spread. Or maybe they were unable. Or that as times got tough this fall, the assistants reverted to the old ways. If the job wasn't getting done, it IS the coordinator's responsibility to communicate with his subordinates, lay out expectations, and change behaviors. If the coordinator meets refusal, sandbagging, or incompetence, then his job is to bring it to the attention of the head coach, if he doesn't have the authority to deal with it himself. All we ever heard out of Franklin was him blaming himself. A manager MUST be able to evaluate the supervisors under him in the chain of command, placing them into one of four categories: Can't do/Won't do, Can't Do/Will Do, Can do/Won't do, and Can Do/Will Do. “Can't” situations have to be fixed by training. “Won't” situations are a motivation or discipline problem. Any analysis other than Can do/Will do, requires immediate corrective action! Turning a blind eye for nine months, then having the situation blow up at mid-season is unacceptable.

Franklin's “Patton Speech” tale also reveals woeful management decisions. Berating your subordinate supervisors in public is a BIG no-no. If the offensive coordinator doesn't respect the position coaches, how can the players? That's ALWAYS a private-meeting situation. And fie on Tuberville, too, for not diffusing that stuff on the spot! Calling out individual players in public is also not very effective. Sure, football players are tough, and they CAN handle name-calling. No argument, there. But... there's a coaching angle to it, also. Suppose the player agrees that he's as terrible as the coach just said. What sort of confidence does he play with, thereafter? The hope, of course, with that tactic, is that the player will step it up, to prove the coach wrong. As soon as the player does that, though, the coach has lost him. The player will, from that point, rely on his own decision-making, because the coach was wrong. While the player will do what he has to do to get through, he'll question everything the coach says. It's a far, far better use of a manager's time, to coach specific failings, than to call names.

There continue to be minor missteps here and there, even since Franklin's departure. While Kodi Burns' biggest issue seems to be a lack of experience, he's splitting reps with two guys who've never played a snap of college football. Our kicker, Wes Byrum is struggling, having missed a number of easy kicks. The past game, though, Wes was one out of two, and the miss was a long one, at 44 yards. Anyone can miss a 44 yarder. Kickers like Morten Anderson routinely miss 44 yarders. The decision has been made this week, to publicly threaten Byrum's job, by bringing in competition. Clinton Durst is being given a crack at place-kicking. Would we REALLY put a walk-on out there, who's never place-kicked in competition, ever? And the timing is horrible. Durst is coming off his worst punting game of the year, with short punts. Do we REALLY need him having to cut his punting reps in half, to place-kick? And, I wonder who struck the I-formation from the playbook, in the second half against West Virginia. It was used only a couple of times, and always with 3 wide receivers and no tight end. Why do we tend to run Brad Lester, who's smaller and faster, mostly into the middle of the line? Why do we run Tate, who's not as quick, but is very powerful, to the sideline? Can we not give Tristan Davis even one carry a game? Let him try the corner a time or two.

I think it's of utmost importance for Tommy Tuberville to re-examine the command structure, and make sure that everyone is on the same page. As it stands now, we look to outside eyes like a dozen managers swimming in random directions, trying to keep our heads above water. It's quite possible that some of the coaching staff really don't know what to do. Are they simply given enough rope for a while, till Tuberville's fed up, and cuts somebody loose? “It's not working. You're fired.” I'm very much interested in any comments anyone has, on this subject. Disagree, flame me, enlighten me, or just vent. Frankly, I hope I'm dead-wrong on most of my assumptions!

I suppose that's enough complaining from the peanut gallery, for now. Auburn has a tough road ahead. I'm very worried about our secondary, against Ole Miss. According to injury reports, Walt McFadden was the only DB we had at full speed, against West Virginia. There's no rest for those guys, this week, as they'll be trying to stay with Shay Hodge, Dexter McCluster, and Mike Wallace, all guys that are arguably faster than West Virginia's receivers. And Ole Miss DOES have a quarterback who can get the ball to them, in Jevan Snead. The offensive line has a tall order, too, taking on a talented defensive line led by the phenom Greg Hardy. I'm hoping that our Tigers will be able to step up, and take the game away from Ole Miss, who HAS been mistake-prone. Regardless, I'll be watching, and cheering the Tigers on, no matter what. Join us here at TrackEmTigers.com, for another live thread throughout the game.