Stakes Are High For Auburn On Saturday

Share All sharing options for: Stakes Are High For Auburn On Saturday 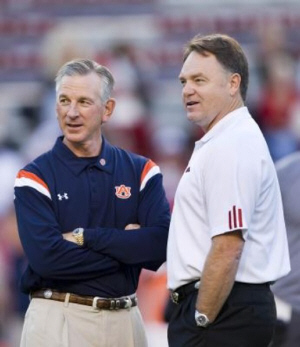 War Eagle and welcome to the first day of the rest of your football season - or so it seems. To say tomorrow's game at Ole Miss is huge would be an understatement. Auburn desperately needs a win over the Rebels to gain momentum and have any hope of winning at Amen Corner.

It won't be easy. Houston Nutt's team has a lot of talent and could easily be 6-2 right now. Ole Miss enters the game with the 55th ranked offense in the nation. That's 36 places higher than they were a year ago. In contrast, Auburn's offense goes to Oxford ranked 109th nationally and still trying to find its way.

The game likely will come down to special teams and that's not necessarily a good thing for Auburn. Tommy Tuberville opened up the kicking duties in practice this week and starter Wes Byrum has gotten a stiff challenge from punter Clinton Durst and backup place kicker Morgan Hull. It appears for now that Byrum has held off the two challengers, but Tuberville notes that could change should Byrum lapse into old habits.

Durst will likely have his hands full keeping up with his Ole Miss counterpart. "Their punter is doing a good job," Tuberville says. "Their coverage teams have been very good. I think they gave up one long return against Samford. Their kicker does a great job of kicking the ball in the corner--deep left corner. He is very accurate."

Today's complete game preview can be found at Talkin Tigers.com. This publication is delivered directly to your inbox and you must be a subscriber. The best part is it's all free. If you're already a subscriber, it should be in your inbox now. If you don't see it, check your spam folder.  To subscribe and begin getting the publication, click here.

Here are some quick hitters to get you ready for Saturday's early morning kickoff...