Share All sharing options for: Tigers Fall Flat After Dark 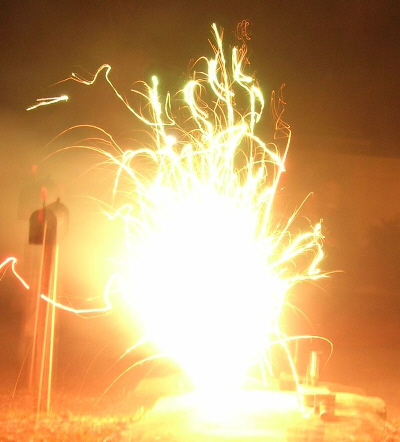 .....The Auburn Tigers roared into Nashville with a bruising attack, but failed to sustain as the sun set, and suffered a dismal 14-13 loss to the Vanderbilt Commodores. The sun has set on Auburn's championship chances, as well. Auburn will now be playing for pride, and bowl position, hoping to play spoiler to the likes of Georgia and Alabama.

.....The Auburn offense, for the third week in a row, unveiled some new plays, most notably, the zone-stretch handoff out of the ace formation. This was called to Ben Tate about 4 times in a row, and had us first and goal. Vandy stiffened, though, and Auburn was held out of the endzone. Auburn then mixed in a little spread, and an offset I, with basically the same runs. Chris Todd made some nice throws downfield when asked to, and we rolled over Vandy for a quick pair of touchdown passes.

.....After the first quarter, the mistakes mounted. Vandy figured out that we only have one blocking tight end, and that the runs were always going to that side. It also appeared that Chris Todd's arm wilted. Suddenly he was unwilling or unable to throw past the line of scrimmage. With costly first down penalties, and predictable runs for nothing, we ground to a halt, while Vandy started moving the ball.

.....In the second half, Vandy started zone blitzing nearly every down, and Auburn could not pass the ball past the line of scrimmage, and runs were largely being stuffed for no gain. Auburn's halftime adjustment was to totally abandon the running plays that did have some first quarter success, and take away blockers against the blitz. Even underneath, there were a few drops, and dubious downfield blocking, as the receivers played their part in the failure, too. I've tried to be positive, but it's pretty obvious now, that we're looking at the worst offensive mess since Earl Brown. Can it get any worse?

.....Special teams took a step farther backwards, with the absence of Robert Dunn. While there were no fumbles, we let the ball hit and roll, WAY too much. Even without a returner threat, we failed to go after Vandy's punter. Vandy was using wide splits, odd formations, and rugby kicks. They were vulnerable, but we didn't even try it. Kicking woes continue. Numerically, we lost the game on a missed extra point. Even Clinton Durst seemed to be affected, with shorter punts, and we did not tackle well on those returns, either.

.....The loss of SenDerrick Marks and Jeraud Powers hurt the defense, too. While we held Vanderbilt under three hundred yards, while spending a lot of time on the field, problems continued. We lost receivers on the slant, on third down, till at least midway through the 4th quarter. The only thing that held Vandy's passing yards down were drops, and missed throws. We also had missed assignments on the sprint option, and we continue to give up dozens of yards on 3rd and long to the quarterback draw. The middle linebacker MUST take out the quarterback on that option, but frequently, there was no one there.

Defensive Line: B-. This was easily the strongest aspect of the Tiger team, in the Vandy game. Even without Marks, the Tigers got penetration and shut down most of Vandy's run game. Quarterback pressure wasn't as good as earlier games, though. The Tigers couldn't get consistent pressure with a 4 man rush. Points off on ends losing contain on the option, as well.

Linebackers: C-. This really should be a split grade, with outside linebackers doing better, and the middle guys doing worse. Merrill Johnson made a bunch of good stops for losses. On the other hand, where are our linebackers on third and long? They don't rush. They don't impede the slants. They don't cover the tight ends. They don't even stop the QB draw. Where are they, particularly in the middle?

Secondary: D+. We can run, and we can tackle guys after 15-20 yard gains. But we're a step slow covering, usually late. Neiko Thorpe faired decently, when they tried to pick on him, but we had problems on the other side. Our safeties cannot deal with square-in routes. On one of Vandy's touchdowns, we couldn't even knock down a pass aimed at the safety's chest. Had we faced a better passer, and had fewer drops, this could have been a 300 yard passing day for Vandy.

Punting: C+.We placed an emphasis on high punts, and several times, Durst had a chance to pin Vandy deep inside the 20. Our first man down, though, and usually our second, always leave their feet, trying to blow the return man up, and they miss. We're having far too many broken tackles on the coverage.

Punt Returns: C. We let several of these things roll, and the blocking was fair-to poor. Chris Slaughter improved the handling, but we're no longer a threat to block any punt, nor hurt anyone with the return.

Kick Returns: C. We improved here, with better security up front, and slightly better blocking. We averaged about 20 yards per return, which puts us back in the mediocre category.

Kickoffs: B+. There was improvement here, as we got down the field and got after return man D. J. Moore, limiting him to 15 yards per return. We still need to be able to kick some for touchbacks, however.

Place Kicking: F. We missed an extra point, and took a delay of game on a potential long winning field goal. In a one-point loss, that's total collapse.

Offensive Line: D. I only give this high a grade because of a strong first quarter running the ball. Our recognition, and line calls against the zone blitzes were horrible. We continue to get false starts and holding penalties by the bushel. Both tackles are getting taken to the cleaners by SEC defensive ends, regularly. Something's got to be done, here, or we have no chance to move the ball in the SEC.

Receivers: D-. They don't get open. When they do get open, they drop it. Three drops in the second half. They don't block well. They don't fight for balls. Where was Rod Smith on the last throw? Looking back, watching the interception. Even when we scored, once, two receivers ran the same route and nearly took each other out with the collision.

Running backs: B+. Hurculean effort by Ben Tate. Had little help, though. Fannin had a few cameos back there, as did Lester. Tate was the only one who had a chance to pick up the blitzing back seven guys, the others never could see it coming. I think Tate went over a hundred yards rushing. One thing's clear, we need more blockers!

Quarterbacks: D+. Barely 50 percent completion percentage, less than 100 total yards passing. Todd looks great in the first quarter, but his throws lose zip as the game goes on. The Commodores were ready for Burns to take off. His longest run was 4 yards. That deep corner route to end the game, was a high school throw. And it never should have been thrown, with cover-two and wide safety splits.

.....We seem to be regressing in many phases of the game, each week. To me, a loss to Vanderbilt is every bit as devastating as the loss to South Florida a year ago. And it's made even more painful by the fact that we abandoned an offensive gameplan that was working in the first quarter.

.....Our offense is an undisciplined mess. We have some talent, but it's not being utilized. We've got to simplify, even down to a half-dozen plays, if he have to. We can't win with all of the penalties, missed blocks, dropped balls, bad routes, and poor throws. It's pretty dismal, and it seems to be getting worse every week.

.....One thing has been made abundantly clear. It's time for a meeting. Now. The head man needs to make a change. Not at the end of the year. Not next week. Not next month. Fire Tony Franklin. Fire him now. Our players deserve better!