Auburn's Program is at a Crossroads

Share All sharing options for: Auburn's Program is at a Crossroads 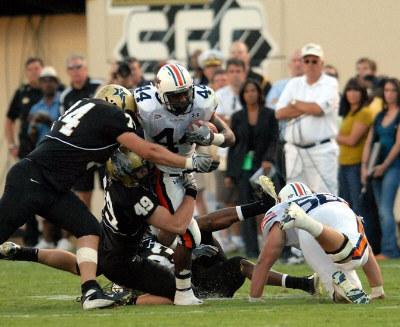 Putting Saturday's loss to Vanderbilt in context is hard to do. Some have suggested it's the most embarrassing in school history. That's probably a stretch. They were ranked. You could argue it was the worst coaching job by an Auburn staff since offensive coordinator Jack Crowe roamed the sidelines in the early 1980's. But that would be unfair to Jack. Saturday was much worse than anything he ever did.

As one Track'em Tigers commenter said yesterday, "the better team didn't win, but the better coaching staff did." No argument here. The truth hurts.

Those looking for drastic changes from Tommy Tuberville will be disappointed. Despite telling the team Saturday night that big changes were on the way, he reaffirmed his support for coordinator Tony Franklin on Sunday.

Apparently, the only big change will be Franklin running more of last year's offense. Come to think of it, Al Borges lives in Lee County and is still on the payroll. Why not order him to work first thing Tuesday morning? What could it hurt?

Most Auburn fans are calling for Franklin's head today, but in reality Auburn is stuck with him for the rest of the season. There is not a Plan B in the middle of the year - see the 1998 season for proof. Like it or not, Auburn people are aboard this train all the way to November 29th.

Most worrisome is that Tuberville doesn't have an answer for what happened Saturday. "It's mind-boggling," the coach said. "I thought we were in a great situation to take the momentum away. They scored right before half, but we were going to get the kickoff. It seemed like in the second half we lost our focus. We had one penalty the first half, 10 the second half--but that is on both offense and defense."

The issues facing this offense have grown much larger than who starts at quarterback. The offensive line is downright confused most of the time. The same guys who were the strength of the team last year, have the deer in the headlights look every time they line up. The Auburn receivers are all but nonexistent.

Most telling was the look on quarterback Kodi Burns face midway through the second half. The kid looked downright scared. Franklin has zapped all the confidence out of this offense. And it's not something that will be fixed in a week or six weeks.

Auburn stood on the edge of the cliff last year and peaked over before righting the ship. Without a senior quarterback to save them this season, they may well fall over the edge. "With two new quarterbacks, that's what makes it kind of tough," said Tuberville. "You don't have a Brandon Cox back there. Brandon could pretty much know what is going on and understand adjustments. These two guys are learning as we go. When you change something, it changes something for them."

Tuberville has gained quite a reputation for being able to plug and play new assistants at a moments notice. Certainly that's been the case on defense. However, for the second time in six seasons, he's brought in an offensive coordinator that isn't ready for big boy football. Auburn is now four years removed from the perfect season and its stock is trending downward faster than Washington Mutual's.

Tuberville has enough equity to survive this bear market. He rolled the dice with Franklin and failed. The question remains whether he'll be smart enough to admit the mistake and move on at the end of the year. The talent at Auburn remains strong. The program is at a crossroads.

Pat Dye stood in the locker room of the Cotton Bowl in 1985 after being beaten soundly by Texas A&M and told the team they "were going to put the program back up there, back where Auburn football belongs." Dye returned to Auburn and made fundamental changes in how he did things. It resulted in four straight top 10 finishes and three SEC Championships over a four year period.

Can Tuberville make the same changes and have the same success? He can if he's willing to admit mistakes and take a hard look at his staff and not just his offensive coordinator. He's got a veteran staff and sometimes change is good. Maybe it's time to break up the gang and try something new. Whether Tuberville has the stomach to do it is anyone's guess. In the end, his job may depend on it.