Obstacles May Be Too Big To Overcome This Season

Share All sharing options for: Obstacles May Be Too Big To Overcome This Season 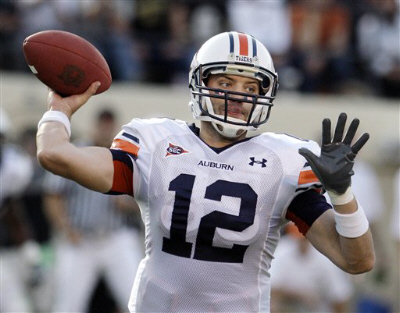 The only thing more disturbing than Saturday night's loss to Vanderbilt is the words coming out of the players mouths since arriving home. Maybe I'm stating the obvious, but it's clear the Auburn coaches have lost the trust of its offensive players. When you hear how open and honest they are to the media, it makes you wonder what they're saying to each other away from the spotlight.

Take for example this little nugget from center Ryan Pugh: "We came out in the first quarter and rushed for about 100 yards and looked like the Auburn of old," Pugh said. "We got our confidence going and then all of a sudden we completely go away from it.

Or this from Ben Tate, trying to make sense of it all: "We're definitely trying to find our identity," Tate said. "As an offense, to be truthful, we're just awful. There's no other way to put it. Your numbers don't lie. When you look at yourself on film, that doesn't lie either. Other teams are probably just licking their chops. We're just not good on offense right now. We just have to find a way to get better."

This doesn't sound like a team that believes it can still win.

I keep thinking back to the comment offensive coordinator Tony Franklin made last week. He was sharing his frustration, saying that it's much harder at Auburn than at Troy because his assistants there knew the spread offense. Franklin went on to say that he's had to teach the Auburn coaches at the same time he's teaching the players.

Is it possible that Franklin's not the one to blame for this meltdown? It's something to think about. Regardless of who comes in as coordinator - offense or defense, Tuberville insists that his core group of assistant coaches remain on staff. Is this really fair to Franklin?

Looking at it this way, you suddenly see Franklin's job in a whole new light. How difficult must it be to have coaches on your staff that have no idea how to run your offense?

Tuberville likes to brag about how he's kept his coaching staff mostly intact since leaving Ole Miss in 1999. Is this a good thing? Have they become complacent? Regardless of what happens on the field, they know their jobs are safe, even if their coordinator's is not.

At the least, shouldn't wide receivers coach Greg Knox be catching some heat - finally? Despite having a number of top recruits over the years, rarely have any of his receivers really lived up to the hype. In fact, most have gone on to better careers in the NFL than what they had at Auburn. Take Robert Dunn out of the equation and this year's group may be the worst Tuberville has ever fielded.

Looking down the road, is this season really salvageable? Can the coaches win back the trust of the players? More importantly, can the coaches' figure out how to run this offense? Can Franklin actually coach something other than the spread? It makes you dizzy just thinking about it.

With Amen Corner just six weeks away, does Auburn really have a chance at righting the ship? History says no. Time will tell.