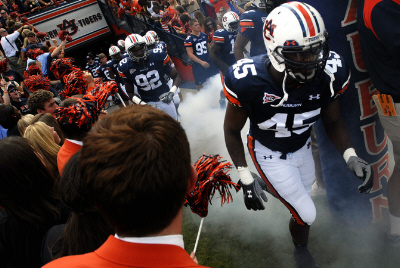 Well Auburn Fans, it is officially time to see what we have when it comes to our position players.  The season is not a failure... it is a speed bump to say the least but not a failure.  The offense looks like a team that is confused, and has no confidence.  Remember when Jason, Carnell and Ronnie would take the field and you knew we would score?  That was awesome, but that was only in 2004.  Remember 2003, things were not so great to put it nicely.  The team had to grow into their positions.  We were fortunate that Al Borges came in and things just clicked.  We all expected this season, with a new coordinator, to be the same and things have not clicked, which again is putting in nicely.   The coaches could at least let the seniors go out with a bang.

Let's open it up.  If Franklin is going to be around, let the players and the fans see what his offense is capable of.  Put in the players that have the most potential, and get them some experience.  If Kodi is our man in the spread, then let him play fulltime, if it is Chris Todd, same deal.  I know who I would choose but... I am not a Coach.  I am not convinced that the spread cannot be a great tool at Auburn.  Florida runs it very well; Ohio State, Penn State and Oregon have a pretty good spread system too. They are all a bit different depending on the personnel on the team I would like to see us going after bigger WRs though; the little guys cannot hold up to a full SEC season.  They tend to get injured and/or worn down.

This system is good, we just need to let Coach Franklin either sink or swim with it.  My personal feeling is that he is not going anywhere.  It will take a year or so to get into it.  Michigan is going through the same thing.  Michigan is in a better position than Auburn solely because all the coaches believe in the spread.  I am not sold on all the staff wanting the spread.  As long as Tuberville is willing to allow Franklin total control, I think we will be fine.  The question is just how long it will take to make that happen, and what coaches have to go in the process.   It appears that things are at least looking up in practice.  The players are talking about how things are turning around.  Coaches and players getting excited, Franklin is out running routes and coaching up the receivers.  Can that translate into production on the field?  We shall see.

I hate to say this but we are down to a two game season now.  Everything between today and November 15 is just a warm up.  Georgia and Alabama is all that matters at this point.  Depending on what state you live in is the difference in the game you want to win the most?  Most of us would rather lose to UGA and keep the streak alive against Bama.  I live in Georgia and with a UGA Grad for a wife, it is a very close race for me but beating Bama is still the greatest feeling in the world.

War Eagle, and don't give up hope yet... Tuberville is a smart man and a great coach.