Share All sharing options for: Wednesday's Actions Cause Irreparable Damage to Auburn Program 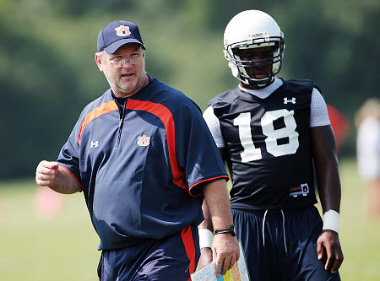 The grand experiment is over. Franklin was fired by Auburn yesterday.

Tommy Tuberville didn't wake up Wednesday morning and decide to fire offensive coordinator Tony Franklin. No way. Tuberville is much too shrewd to make such a knee-jerk decision in the middle of the week. Less than 24 hours ago, he said it would be catastrophic to make a change at this time.

The truth will come out soon. Rumors are already running rampant. I can save you time speculating. Tuberville and Franklin had words on Wednesday. Franklin wanted to do things his way and Tuberville had his ideas. The guy with the biggest stick (or substitute like word) won. It's business. It happens everyday. On Wednesday it happened at Auburn.

Now here we sit on Thursday morning. Auburn's program has unraveled faster than a Sarah Palin television interview. The once steady Tuberville has his team teetering on the verge of a complete collapse. The firing has divided the Auburn nation into two camps - those who believe Franklin should have been given more time and better circumstances and those who believe the change was much needed and couldn't wait.

Regardless of where you fall, it's hard to deny this move has caused irreparable damage. With Franklin out the door, Tuberville is left with the same offensive staff that nearly got him fired in 2003. The question is will they finally get the job done this time? Isn't it ironic that all of this takes place during the week that Bobby Petrino makes his return visit to Jordan-Hare Stadium?

Pat Dye said it best Monday, "Auburn fans are worried. They see that light in the tunnel and it's a freight train coming right at them." We all know what he's talking about. Time is running out. The odds are long.

It appears the offense will now be in the hands of Steve Ensminger, Hugh Nall, Eddie Gran and Greg Knox. This hardly makes Auburn fans sleep well at night. I still can't picture what practice must have been like yesterday. What offensive formations did they practice? Who led it? Who got the reps at quarterback? It had to be complete chaos.

The sad thing is this is just the tip of the iceberg. Where does this leave the much heralded recruiting class of 2009? You can bet those commitments will shrink significantly in the coming days. What do you tell a recruit when they ask what kind of offense you run?

Tuberville says he's still committed to the spread. Really? Has he checked to see if the rest of his staff is? What about his players? They've been all too vocal about their dislike of this new offense. Will things be that drastically different with a new coordinator running a similar scheme?

What becomes of Kodi Burns and Chris Todd? Burns has to be thinking about transferring regardless of what happens the rest of the way. Can we blame him? Todd is now like a refugee. Where does he turn? Does anyone care?

What we should care about is the impact it has on defensive coordinator Paul Rhoads. Does he want to return next year to such a dysfunctional situation? Let's face it, after this season every school in the country with an opening will be coming after him. What he's accomplished is miraculous. He'll be in demand. If you had no allegiance to Auburn would you stay?

I wrote earlier this week that the Auburn program was at a crossroads. The question now is whether it's at a dead end? I have a hard time believing what happened on Wednesday was best for this team and program. I never liked the spread. I didn't believe it would work in the SEC. I did like Tony Franklin. And I do believe he should have been given the rest of the year to get it right.

I doubt it would have succeeded. But Auburn and Franklin made a commitment to each other. Call me old school or naïve, but I believe Tuberville should have honored his commitment through the end of the year. If things don't improve, then you make a change - not after only six games and certainly not after giving such a public vote of confidence earlier in the week.

The Perfect Season of 2004 seems so far away now.