It's Time For The South's Oldest Rivalry

Share All sharing options for: It's Time For The South's Oldest Rivalry 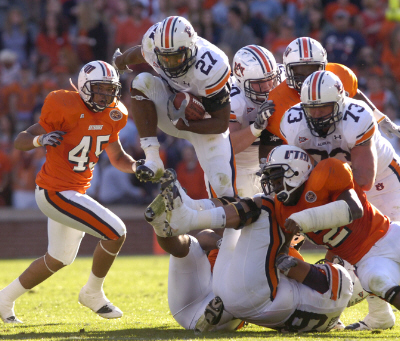 Auburn will need more production from its running backs to beat Georgia.

Welcome to the start of Amen Corner! This season certainly won't be one we talk about for years to come, but no matter what the records, I still get excited about the South's Oldest Rivalry.

Let's not forget about the situation two years ago when Georgia came calling on Auburn at Jordan-Hare Stadium. The Tigers were ranked fifth in the country and expected to roll against a young, struggling quarterback named Matt Stafford. The Bulldogs had lost four of their last five games and given little chance against Tommy Tuberville's team.

On that rainy, muggy early Saturday afternoon, Georgia finally put it all together and upset Auburn 37-15. Sound familiar? Never assume anything in this series. The odds are long, but you still have to play the game.

By now I'm sure you've heard that Saturday's game will be televised by Raycom Sports, which means an 11:30 a.m. CT kickoff. That's the price you pay for underachieving.  For the second time in three years, this game draws the short straw.

This is not good if you're Auburn. Why? This weekend's game is perhaps the biggest of the year for recruiting and because of the early start many high school players will not be able to get flights to Atlanta or Montgomery in time to make it for kickoff.

We can all thank the NCAA. A couple of years ago they decided it wasn't in the best interest of the student athlete to ride on school planes. Tuberville was a leading opponent of the proposal, along with Alabama and several other SEC schools. Nonetheless, it passed and now high school players must fly commercial into the closest airport and often drive several hours to reach the school they are visiting.

Auburn was hoping to be picked up for the night game by ESPN 2, but they decided to go with Vanderbilt-Kentucky. If that's not the true sign of a bad season then I don't know what is.

In Monday's Talkin' Tigers we preview the Georgia-Auburn game. If you're already signed up it should be in your inbox. If you don't see it, check your spam box. If you're not a member yet, click here to join. It's free.