Auburn Struggles to Put Away the Skyhawks

Share All sharing options for: Auburn Struggles to Put Away the Skyhawks 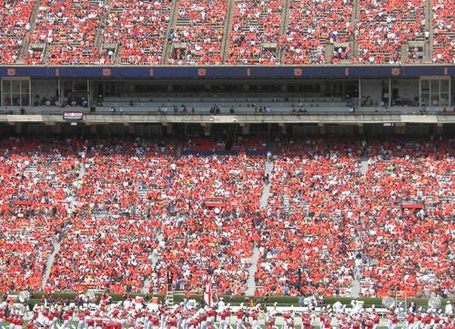 War Eagle, everybody! It's time now for a belated Acid Reign Report. Another Homecoming has come and gone, and Auburn won their 17th such game in a row. Auburn outlasted the University of Tennessee at Martin, 37-20. Last loss at Homecoming was back in the Dye Era. In 1991, Tony James broke a late 63 yard run for the Mississippi State Bulldogs, to beat Auburn 24-17.

Last Saturday, Auburn broke a four game losing streak and went on to win against the Football Championship Subdivision Skyhawks. With several starters out of the game, and more banged up, the Tigers really struggled. Auburn did not put the game away, till the 8:16 mark of the 4th quarter, when Kodi Burns broke loose on a 58 yard touchdown gallop.

On offense, Auburn rolled up 452 yards on the Skyhawks, but the number is deceptive. The Tigers came in expecting to work on their running game. The running backs combined for 35 carries for 159 yards, but against a lower division school, that's pedestrian. It took four running backs to combine for a single yard more than the starting quarterback amassed. The passing game started off ice-cold. Even when successful throwing and catching, it was never more than ten yards down field. Kodi Burns accounted for much of the offense, with 158 rushing yards, and 130 passing, for 288 yards total.

Defensively, Auburn did a decent job of gap control, and a good job of chasing runners down. On pass defense, however, the unit was poor. Injuries to members of the secondary contributed. We routinely gave the receivers a ten to twelve yard cushion, and had no chance of coming up and making a play on UTM's short passes. There was criticism of the pass-rush on the radio, which I don't understand. Auburn only rushed 4 most of the day, and they did get some pressure, and kept the pocket contained. There aren't going to be many sacks, when all the opposing team has to do is take a three step drop, and zing it to a receiver with a ten yard cushion. Right now, Auburn's having trouble covering a smoldering match with a wet blanket.

Special teams were a mixed bag. We had another explosive kick return for a score, and Wes Byrum hit some long fields goals. On the flip side, we had an awful series of decisions on an early punt return. Our one punt was terrible, and kickoff coverage was lackadaisical.

Defensive Line: B. Again, you're not going to get many sacks when the opposing quarterback can take the snap and gun it immediately. Guys stayed in their gap, kept contain, and collapsed the pocket pretty efficiently. UTM only managed 66 rushing yards. The longest run of the day was 20 yards. Then again, the defensive line was playing a pretty severely out-classed offensive line, even considering that Auburn's entire starting unit did not play.

Linebackers: C. Tackling was better, gap control was there, but coverage was not good at all. There were a number of ten-plus yard throws to running backs and tight ends. On the rare blitzes, linebackers were ineffective. The Auburn linebackers managed only one tackle for a loss, the entire game.

Secondary: D-. Safety tackling was maybe a little bit better. Neiko Thorpe did get the late interception. But this was a pretty miserable performance, for the most part. The Skyhawks could run the out, the bubble screen, and the square in, at will. The only thing that stopped them was dropped balls, and missed passes. When you let a Championship Subdivision team complete 27 passes on you, you're playing pretty poorly in the secondary.

Punts: F. Only punted once, and it was ugly. 20 yards = FAIL. Suddenly, Clinton Durst is having trouble fielding the shotgun snap!

Punt Returns: D. Yes, Dunn did have a nice return or two, and Slaughter had one as well. But, on Dunn's first return, the decision to field the ball headed to the goal line was not good. Dropping the ball on said punt was worse. Worst, though, was failing to fall on the bouncing ball in the end zone! That was three bad, bad errors in judgment on one single return!

Kick Returns: A. Tristan Davis' kick return was an amazing show of power. It wasn't really a case of outrunning them to the outside. Davis sliced through would-be tacklers with a rare combination of grace and power. Of course, we had him block too many lead plays into the short side, and he was out of the game before he could try another...

Kickoffs: F. Wes Byrum could only managed kicking the ball to the ten yard line. Morgan Hull was slightly better. Coverage was awful. No one got off blocks, or broke up wedges. Arm tackles were the norm. Giving up 29 yards per return to a FCS team is terrible. It took a very questionable “foot on the line” call by the officials, to keep one return from being a touchdown.

Place Kicking: B. Points off for missing a long attempt, but Wes Byrum was 2 out of 3 from beyond 40 yards, and made all of this shorter kicks. The 48 yarder against the wind was great! Had some serious leg-drive, on that thing!

Offensive Line: B-. No penalties! Pass protection was generally pretty good, but consider the competition. At times, Jerrod Grace and Ray Williams caused trouble for the middle of Auburn's line. Run blocking was solid, but unspectacular. I would have expected more domination against an FCS team.

Receivers: B. Solid blocking, guys got open, AND, no drops! It's been a while since we could say that! Auburn favored the run, strategy-wise, and didn't really attempt many long passes. Still, Auburn's receivers were there when called upon.

Running Backs: D. Auburn's longest running back run was 19 yards, which is pitiful against a FCS opponent. Every back except Ben Tate had a run or two where they tried to run backwards and outflank defenders, resulting in getting tackled for a bigger loss. There was repeated failure to pick up the corner blitz. The most telling thing, visually, was that backside linebackers and ends chased down a LOT of our runs. That's either a sign of either a slow-developing play, a slow running back, or both.

Quarterback: B+. Kodi Burns certainly had a memorable day running the ball! And, he was sacked only once, on an unblocked corner blitz. No turnovers. Passing wise, Kodi was not always accurate, particularly on the few passes he tried to throw downfield. Kodi still is not setting his feet to throw. On one big pass to Tommy Trott, Burns actually leaped backwards, slinging the ball while in the air going backwards. Still, it was passable, and the running was a plus. When we needed points, Kodi delivered. Also, Neil Caudle had a nice series, showing speed and toughness on a key quarterback draw. Caudle also showed a strong arm on a couple of out-routes. I don't think we've had a crisp zipper of a pass to the sideline before, all year.

Auburn got out of Homecoming with a win, which is what we needed to do. There were some exciting plays, but a LOT of really bad ones, too. This is a team still searching for answers in quite a few areas, here as the season winds down. Most concerning is the apparent lack of speed, toughness, and ability in the back seven of the defense. We're really walking wounded, here. Occasional gaffes continue to hurt otherwise good special teams units. Offensively, we still are having problems game-planning.

Amen Corner is here, folks. Are we ready to take on the likes of Georgia and Alabama? We'd better be! Here's hoping Auburn can pull off a pair of shockers! War Eagle! And join us on the open thread, early Saturday morning!