Share All sharing options for: Dawgs Escape from Jordan Hare 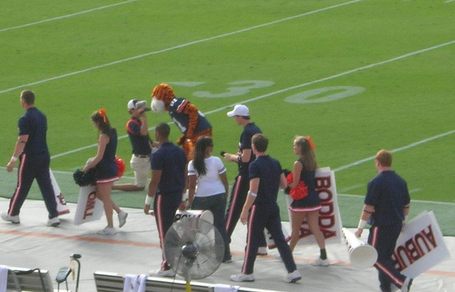 War Eagle, everybody. Time now for the Acid Reign report, on yesterday's 17-13 loss to the Georgia Bulldogs. On a cold, blustery November Saturday, Auburn put up a valiant effort, but special teams mistakes, soft coverage, and help from the referees doomed the Tigers. Several banged up Auburn stars returned for this game, but as usual, we got several more banged up. Starting tight end Tommy Trott's season may be over, with a knee injury.

Defensively, we continued to play a soft cushion zone in coverage, and gave up numerous short and medium passes with no one on the receiver. Early on, we had no answer for Georgia star Knowshon Moreno, as we could not get both arms around him and hold on. As the game wore on, Auburn used more run blitzes, and slowed the dynamic back down. Battered and bloodied, the defense did dig in and limit the powerful Bulldog offense. However, I'd say that some errant Stafford throws, perhaps wind aided, and some odd play calling benefited the Tigers, as well.

Offensively, Georgia took our best play, the quarterback keeper by Burns, out of the playbook. Speedy linebacker Reggie Curran was assigned to spy Kodi Burns, and for the most part, Curran shut Burns down. Additionally, Georgia defensive ends were careful to stay home, and not get sucked into backside pursuit on the zone runs. When Kodi tried to bootleg out the back side, he always had an unblocked defensive end in his face. Georgia's secondary did a good job in man coverage, taking Auburn's downfield routes away. Auburn had no one in the receiver corps able to break away deep. Auburn's most dynamic player was Mario Fannin, but Fannin was limited to only 12 offensive touches, 8 runs and 4 receptions. Fannin accounted for 108 yards and two touchdowns on those plays, but he was NOT on the field for the last two drives of the game. Tuberville said that it was Ben Tate's turn, and that Tate was running well. The stat sheet shows Tate with a 2.6 yard per carry average. In a year of weird decisions, that's another one that stands out.

Special teams continue to fall apart at the worst possible times. Clinton Durst did a fine job punting, and shook off a big hit in his own endzone. Punt return decisions were generally terrible. We've regressed badly there. Kick returns weren't blocked well, but that's nothing new. Kickoffs reached a new low, as we failed to even crack the five yard line once, and kicked one out of bounds to set up UGA's game winning drive. The place kicking team muffed a snap, resulting in a failed extra point. Wes Byrum missed another field goal attempt, and was benched in favor of Morgan Hull. In fairness to Byrum, that attempt should have never been made, from 42 yards against a stiff wind.

Defensive Line: C. Against an injury-depleted UGA line, our unit failed to impress. The line failed to bring Knowshon Moreno down on numerous hits in the backfield, and got very little pressure on Mathew Stafford without blitzing help. All in all, the defensive line tallied six solo tackles, and 5 assists. We needed more production here, to shut down a good Georgia offense.

Linebackers: C+. Early points off on poor tackling on Knowshon Moreno, but things tightened up as the game went on. Merrill Johnson, Craig Stevens and Chris Evans contained well, keeping Moreno from getting the corner. Josh Bynes continued some soft play in the middle, especially early. Gap control was generally pretty good. Points off on wacky pursuit angles, and horrible tackling on Moreno's screen pass TD catch and run.

Secondary: C. Good job, for the most part, in preventing the deep ball. The one that was caught, though, was the game-winner. We used some press man coverage in the second half, cover one with the safety over top. It worked pretty well, till Stafford decided to test us with a post. Powers wasn't tall enough on that play, and McNeil failed to come up till it was too late. The cover two with a ten yard cushion was exploited repeatedly on wide receiver screens, hitches, and quick outs. Zach Etheridge made some good, TD saving tackles downfield, and seems to be slowly returning to his form from a year ago. Press coverage is a dangerous option, though, as we only seem to have one corner capable of staying with his man consistently, Walt McFadden.

Punting: A-. You really can't argue with a 45 yard average in the swirling wind. Durst did hit his first one short, but got the roll deep inside the ten. Nice job by the coverage team, getting on a Prince Miller fumble. We did have one return late, where Logan Gray picked up 13 yards on us.

Punt Returns: F. Dunn caught the first one behind the 15, and retreated back inside his own five with a half-dozen Bulldogs all over him. A senior just CAN'T make those kinds of decisions! Dunn's second attempt was a fair catch with no one within 15 yards of him. Dunn's third appearance resulted in him letting the ball hit the ground at the 11, and be downed at the 7. Every Georgia punt resulted in Auburn starting at their own 20 or worse. We tallied NEGATIVE 8 returns yards, here.

Kickoff Returns: D. No fumbles, but we tallied just 46 yards on 3 returns, and got a crucial block in the back call against us. 15 yards per return is poor. Blocking was non-existent.

Kickoffs: C-. We averaged kicking it to only the ten yard line, and kicked one out of bounds late with a lead, to set up UGA for their game-winning touchdown. The opening kickoff was a very lucky squibb, that bounced through about 5 UGA blockers, down inside the ten. Bonus points for limiting Asher Allen and Josh Bagby to 13 yards per return.

Place Kicking: D-. Missed our only field goal attempt, BADLY, into the wind. Muffed an extra point snap. And, we lost by those four points, as well.

Offensive Line: C. We had difficulty handling Geno Atkins inside on run downs, and outside on the tackle-end twist, on pass rush downs. Tyrone Green got flagged for holding at the Georgia five yard line, and we ended that possession with no points. Lee Ziemba got ANOTHER 4th quarter false start flag.

Receivers: C. We failed to separate from Georgia coverage downfield, for the entire game. Of the starters, Montez Billings fought through a broken nose for 6 catches of short passes. Rod Smith was shut down, with only one catch for 10 yards. Tommy Trott's only appearance was a drop, that he juggled upwards, and was lucky wasn't picked off. Gabe McKenzie had a drop, also. Considering that he hasn't practiced on the offensive side since September, that's not so bad. The ball was thrown a bit behind him. Wide receiver blocking was decent, but not spectacular.

Running Backs: C+. There were some electric plays out of Mario Fannin, and the biggest mystery is why he didn't play more. Both Tate and Fannin had some good pass receptions out of the backfield, but Tate dropped the last pass, off his hands at the end. Blitz pickup was decent. Both backs, though, often had trouble picking out a hole. Take away Fannin's 35 yard TD (which he created out of NOTHING!) and the backs managed just 61 yards on 21 carries. 2.9 yards per carry will NOT win, in the SEC.

Quarterback: B. Kodi threw no interceptions, and lost one fumble (points off. Can't do that!). His running was limited by the Georgia plan. What hurt Kodi the most, though, was a total lack of playmaking by his receivers. He enjoyed decent protection, but frequently no one was open. Even so, Kodi picked up some clutch first downs, and led Auburn down twice at the end. And, he somehow managed to scrape together 16 completions in 30 attempts. Kodi's skill-position teammates need to pick it up, and help him out.

In the end, it was an error-marred game by both teams. Auburn's special teams were a serious albatross, and the offense failed to get the job done in plus territory. Many Auburn fans were expecting to be blown out in this game, but the Tigers never quit. The team remains capable of winning, if they eliminate the mistakes.

The Tigers now have two weeks, to heal more, and work on ironing out some fundamentals. If we can shore up the special teams mistakes, heal the defense, cover a little better, and make some plays at wide receiver and running back, Alabama should be very beatable in Tuscaloosa. War Eagle, everybody, and let's get ready for the Iron Bowl!