Share All sharing options for: Let The Talk Begin... Countdown to Seven 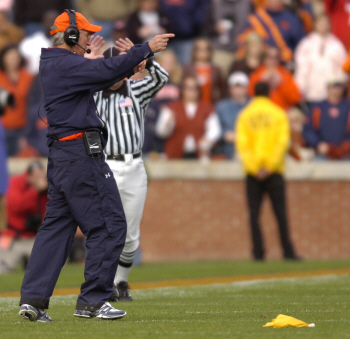 Tuberville finally showed a little fire in the belly on Saturday.

Can we possibly be getting ready for the Iron Bowl again? Even in a year that sometimes feels like it doesn't move fast enough, it's hard to really believe that another season is almost in the books. Auburn returns to practice today in preparation for the November 29th showdown with top-ranked Alabama.

As I said in my Talkin' Tigers column today, there's a lot to build on following Saturday's disappointing loss to Georgia. Tommy Tuberville has to feel much better about his team after watching the game film. We saw quarterback Kodi Burns grow up and a defense return to its old form. And it looks like we finally have a running back in Mario Fannin. Even Tuberville finally showed some emotion. Who would have thought it?

Let's not forget that some of Auburn's biggest wins over Alabama came after tough losses to Georgia. Dating back to 2003, Auburn has come back to defeat Alabama on three occasions after getting beaten handily by Georgia. And don't underestimate the off-week in helping Auburn get better. If a team has ever needed some time off, it's this one. You'll see a much faster team in two weeks. Of course, the same can be said for Alabama.

We extend congratulations today to several of our loyal readers who went over to Dawg Sports.com last week and raised a little hell with the Bulldog Nation. They were so successful in their work that the following Track'em Tiger members were banned by the site for telling the truth: Okietigerr, Gumptown Tiger, War Eagle Atlanta and Carlege. As a token of our appreciation, we've inducted each of you into the first class of our Track'em Tigers Hall of Fame. You all bring a tear to my eye!

Tuberville announced on Monday that tight-end Tommy Trott and kicker Wes Byrum are out for the Iron Bowl due to injuries. Gabe McKenzie will start at tight-end and Morgan Hull will handle the kicking duties.

Already struggling on special teams, the loss of Byrum may be bigger than most expect. Despite having a terrible sophomore campaign, Tuberville still seems to have faith in his kicker; so much so that after Byrum was injured on Saturday, Tuberville had second thoughts attempting a field goal with Hull.

"Morgan went out there," Tuberville said. "After he went out there and we got to thinking about the scenario of it being the first time him being out there, I said ‘Let's don't do it. Let's go for the touchdown.'"

With the Tigers struggling this season, much of the talk has been about whether Auburn can hold on to its much heralded 2009 recruiting class. If this weekend is any indication, things appear to be just fine.

"This is where I want to be," Cotton said. "I get along with the players real well. I just like it here. That was a great atmosphere. It's a big stadium. To have that many people supporting you in a game is really good. I'm not used to having a big line. I believe I can do something with that, have fun with that."

Lutzenkirchen says he's not worried about Auburn's offensive woes this season and is confident in where Tuberville is leading the team. "They said they are going to stick with the spread and do a lot of one-back type stuff," Lutzenkirchen said. "You do have to run the ball in the SEC. This is 100 percent where I want to go. I'm still going to take my other visits just to see some other places."

This comes as a huge relief to the Auburn coaches. Both were thought to be softening their stance on Auburn, especially Lutzenkirchen. This news combined with Auburn's play against Georgia has to increase the odds of Tuberville returning for an 11th season on the Plains.