Share All sharing options for: Tuberville Reflects on Season and Upcoming Iron Bowl 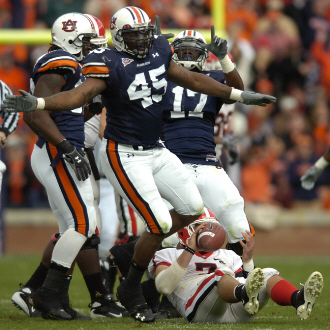 Auburn takes the weekend off before returning Sunday.

War Eagle and Happy Friday to you! I don't know about you, but I hate this off week between Georgia and the Iron Bowl. I can remember as a kid being in absolute agony waiting out the days to kick off with Alabama.  What the hell was I thinking? Growing up in the 1970's, we never won anyway. But it still didn't stop me from believing and getting excited about the best rivalry in all of sports.

This year things are really screwed up. I actually have to put my Christmas tree up the weekend before Thanksgiving. With the game next Saturday, my guess is there will be a lot of Christmas trees sold in the state of Alabama over the weekend.

Today at Talkin' Tigers I write about Tommy Tuberville and his chances of returning next season. Outside of a total collapse in Tuscaloosa next weekend, I believe he'll be back next year with an entirely new offensive staff.  Click here to read.

Speaking to reporters on Thursday, Tuberville was in a reflective, laid back mood. Despite this year's record, he says this season compares very closely to last year's. "Same season we had last year," Tuberville said. "It's really no different, other than we made a few plays at the end of games. This year we didn't make any - just a couple of balls in the end zone, extra points missed, field goals. There's really not a lot of difference." With all due respect coach, it certainly feels a lot different.

If Auburn fans have learned anything this year, it's the value of a seasoned quarterback. Being ranked preseason top 10 was probably stupid on the pollsters' part considering Auburn started two quarterbacks who really never played prior to this year. Shame on us for believing them.

It's no coincidence that Alabama, Florida and Georgia are tops in the SEC and all have veteran quarterbacks.  On the flip side, look at Auburn and LSU and the struggles they've faced without proven signal callers. Let's remember this down the road when preseason rankings come out in the summer.

"They're not rated that high throwing the ball, but they're physical and run the ball well. They have a fifth-year senior quarterback making good decisions. Their defense has, I'm sure, played to their expectations. They've stayed healthy. Their kicking game has been solid and has been very fruitful for them."

Despite what many believe, Tuberville says the Iron Bowl has very little impact on recruiting. He says the game is more about pride than anything else. "This is for bragging rights. That's what it basically comes down to," Tuberville said. "In their situation, they have a chance to continue on in the BCS. If we win, we have an outside chance at getting to a bowl game, I guess. "You hear everybody talk about rivalries across the country. In terms of intensity, none of them touch this one."

Auburn practiced for two hours on Thursday and will have a walk through this morning before getting the weekend off. Practice will resume on Sunday afternoon.

The Tigers are expected to be two touchdown underdogs when odds are released by Vegas on Sunday. Privately coaches say they feel good about Auburn's chances next week, despite being heavy underdogs. Looking at a position-by-position comparison, Auburn does appear to matchup better against Alabama than they did Georgia. One thing is for certain, they'll be healthier next Saturday than at any point in the season.

Have a great weekend and War Eagle!