Share All sharing options for: Iron Bowl All Week at Track 'Em Tigers 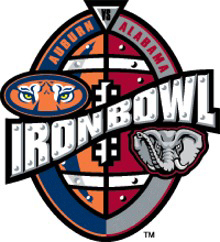 Dibs on the Iron Bowl logo this week!

It's that time of year again, when the state chooses sides, and armed camps assail each other with taunts and threats, all looking forward to Saturday to see which sides' way of life is confirmed to be superior for the next 365 days. We plan to have plenty in the way of festivities this week, especially considering that this game might have to suffice as our bowl game this season, so stick around, and see who the winners and losers are, and who might be commemorated in a Daniel Moore painting.

Join us this week, which will culminate with the streak either being extended to an unprecedented 7 games, or with Saban finally gaining a toehold in his quest to dethrone Tuberville from his six year reign as King of Alabama. Either way, hang on! It's gonna be a helluva ride!

So without further adieu, let's open with a little smack, our first poll of the week: