Can Auburn Upset the Tide?

Share All sharing options for: Can Auburn Upset the Tide? 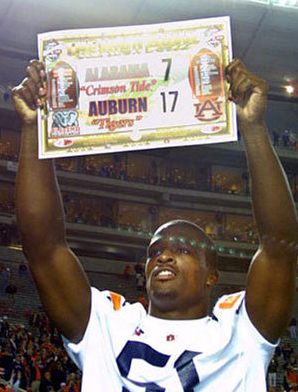 Auburn has won before, as a heavy underdog in T-Town!

War Eagle, everybody! It's Iron Bowl Week! Are you fired up yet? It's certainly my favorite time of year! This year, Auburn comes in in a bit of an unaccustomed position, that of the underdog. Looking back at history, Auburn has won the Iron Bowl only twice, ever, when coming in with a losing record. The Tigers are 5-6 this season, and face a daunting task in Tuscaloosa taking on the top-ranked, undefeated 11-0 Crimson Tide.

In 1901, Auburn limped into Tuscaloosa with an 0-3 record, having only scored 5 points, ALL YEAR. M. H. Harvey's Alabama team was undefeated, and had not allowed a single point. Auburn prevailed, that day, taking home a 17-0 victory. Backs Sloan and Guin scored for the Tigers, handing the Tide their only loss of the season. It would be Auburn's last football visit to T-town for nearly a hundred years.

In 1949, Earl Brown's second Auburn team came in with a 1-4-3 record. Auburn had lost to Bama a year before, 55-0, and the Tigers had started the 1949 season with 4 losses in their first five games. However, they entered the Iron Bowl coming off back to back 20-all ties against Georgia and Clemson. Auburn had improved on offense, led by All-American quarterback Travis Tidwell. Red Drew's Tide unit came in riding a five game win streak, fresh off a 35-13 demolition of Florida in Gainesville. Bama expected to win big, as a 21-point favorite, but Auburn dug in, and the game was tied 7-all in the 4th quarter. Auburn's points had come off of a pick-six. Auburn's single-wing offense drove 71 yards down the field in the 4th quarter, with Tidwell largely being used as a decoy. Bama was keying on him, but Bill Davis ripped off an 11 yard run to put the Tigers ahead. Bill Tucker's extra point made it 14-7. Bama would answer with a late drive, and Tom Calvin would score for the Tide, but a missed PAT gave the Tigers a 14-13 upset victory. It was a sweet end to arguably the worst decade in Auburn football history, the 1940s.

As I look back on past Iron Bowls, an amazing stat jumps out. This is my 49th season of Auburn football, and this year is only the 4th time in that period that Auburn has entered the game with a losing record. Unfortunately, the results in the three previous such games weren't so good.

Shug's last game in 1975 was one where Auburn entered at 3-5-2. We had no offense, as our best threats were banged up, and we faced a good Bama defense that practiced against the triple option every day. Auburn was able to slow Big Johnny Davis down in the middle, but Richard Todd and Willie Shelby worked wishbone option magic on the corners, and Auburn fell 28-0 on TV.

In 1976, Doug Barfield's inaugural team went Iron Bowling even more depleted than in the previous year. Tony Nathan ran wild, and Bama rolled up a big 38-0 lead. Only a late 1 yard plunge by Auburn reserve running back Foster Christy kept this game from equaling the worst Iron Bowl loss of my lifetime. A 38-7 loss to the Tide ended one of the most dismal seasons in my lifetime.

In 1998, with a 3-7 record, Auburn came in two coaches short, as Terry Bowden and Rodney Allison had skipped out at midseason. Auburn dominated for a quarter and a half, rolling up a 17-0 lead behind a dive by Heath Evans, and a fade route from Gabe Gross to Karsten Bailey. Bama caught fire, though, behind freshman quarterback Andrew Zow, and versatile running back Shaun Alexander, and Bama rolled off 31 unanswered points, dooming Bill Oliver's campaign to be the next Auburn head coach. Bama won, 31-17.

What result does 2008 have in store? We'll find out Saturday. I do believe that this is by far the best Auburn unit to come into the Iron Bowl with a losing record. The defense showed signs of recovery against a potent Georgia attack, and figures to be even more healthy after a two week layoff. Coordinator Paul Rhodes has even remarked about how much quickness the unit has displayed this week in practice. The offense continues to improve as well, led by young, developing stars Kodi Burns and Mario Fannin. Special teams have been solid at times during the year, and might be again. It would certainly be awesome, to derail Bama's perfect season, and send them toppling down from the top of the polls!