It's Time To Count Our Blessings

Share All sharing options for: It's Time To Count Our Blessings 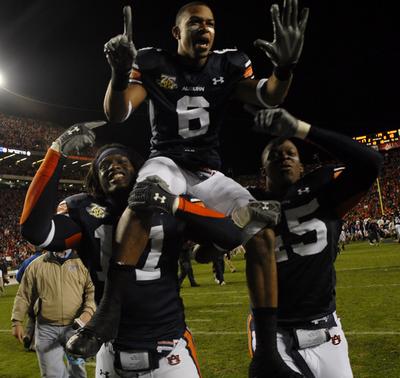 There are at least six things to be thankful for this Thanksgiving.


Count me among those who enjoyed playing the Iron Bowl the week following the Georgia game. It's hard to get excited about Thanksgiving when the biggest day of the year follows only 48 hours later.

Thanksgiving has always been one of my favorite holidays. The older I get the more I enjoy Turkey Day. There's no stressing over gifts to buy and you still get to eat good food and watch football. When you think about it, it's the perfect American holiday.

If only we didn't have to worry about the Iron Bowl.

Wouldn't it be nice to have number seven in our pocket come Thursday morning? I say we make a pact right now. On Thursday we put the Iron Bowl in the back of our minds and give thanks for our family, friends and health.  Deal?  I'm starting right now.  Below are the things I'm most thankful for this Thanksgiving...

I hope all of you have a great Thanksgiving and I look forward to talking with you this weekend. Don't count Auburn out yet. Number seven is not out of the question. War Eagle!