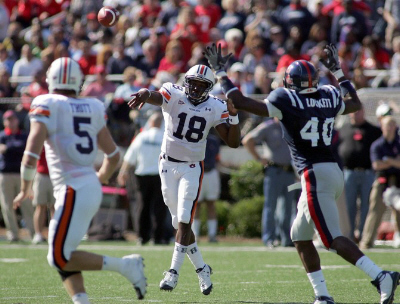 Welcome to Day 37 of the Auburn losing streak. I'd like to say things will get better, but I know you're much too smart for that kind of talk. Go ahead and buckle your seat belt, things are about to get rocky for Auburn people.

Don't be surprised this week to hear the drum beats get louder for Tommy Tuberville's ouster. This story combined with Alabama being ranked first in both major polls is every Alabama sports writer's dream. Look for the newspapers in Birmingham to stoke the fires daily.

The important thing for Auburn officials is to not give them fodder for these articles. That's sometimes easier said than done for Auburn leaders. There's more on that today at Talkin' Tigers.com. You know the drill by now. If you subscribe, it's already sitting in your inbox. If you haven't signed up, click here. It's free.

When Auburn lines up to face UT Martin on Saturday, you're likely to see a lot of new faces on the defensive side of the ball. As the losses stack up, so do the injuries. Be sure to buy a game program before heading into the stadium - you are going to need it.

Below is a list of players who are questionable or out for Saturday...

Add to this the loss of linebacker Tray Blackmon and you can see why this Auburn defense looks nothing like the unit of four weeks ago. "We haven't had any consistency all year," said Tommy Tuberville.

"We don't make excuses, but you can't just keep putting guys in there and thinking you are going to be good. Tray was our best run guy in the middle. Josh has done well. Josh is more of a lateral guy. Against teams that are going to run right at you, Tray was our bellcow that we hung our hat on.

"We've missed a lot of tackles. Chris (Evans) has been nicked up all fall. It's just little things, getting misaligned, missing a tackle. If you look at where we started, we're probably playing four or five guys in the front seven a lot more than we normally would have."

How bad are things? Consider this: If Auburn were to play today, they'd line up freshman D'Antoine Hood at one corner and fellow freshman Harry Adams at the other. Who would have thought it back in August?

Amen Corner takes on a whole new meaning this year at Auburn.