Share All sharing options for: The Iron Bowl Debacle 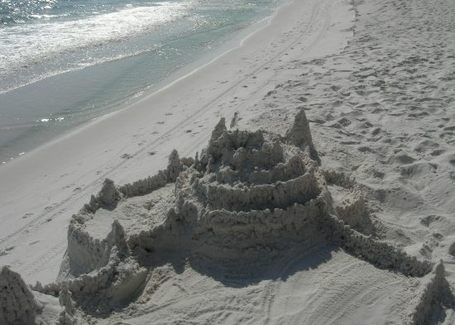 I'd have rather been at the beach!

War Eagle, everybody. My apologies for the late grades. After what I witnessed in the Iron Bowl, I did what I had to do, to take my mind off it, Saturday night. There are certainly better things to think about, such as the beach. I wish I were in the sun, at the beach, right now. I had been considering handing out just a single grade for this last game of the season; a big fat F. Point-wise, it was the worst Iron Bowl loss I've ever witnessed.

At Auburn, however, we believe in work, hard work. As always, we'll look back, and see what went wrong, before laying this disastrous football year to rest. Auburn repeated a season-long pattern of second half collapse. The Auburn program certainly does hard work, but is it the right work? Are we wearing down too easily, as games wear on? Are the multitude of injuries the past few seasons the result of bad luck, or inadequate preparation? Reports of starters trying to heal have become every day news, during spring and fall camps, lately.

Before the game analysis, I'd like to congratulate the Alabama Crimson Tide on a well-played game. While we absolutely hate taking a beating like that, I can appreciate a professionally-run operation like we witnessed. There were some complaints here and there about Alabama throwing the late 3rd down pass for a touchdown, running up the score. I don't begrudge the Tide that. It's still our job to pass-rush, and cover the receivers. The backups DO work just as hard as the starters, and deserve a chance to shine on the field. Saban only took that one shot, and he could have tried a higher-percentage field goal, or run up the middle and given the ball back to us. I don't think it was unreasonable to allow his backup quarterback to take one shot down the field. We've NOT done that when we were up big, at Auburn, the past few years. The result has been that many good high school skill players have decided, the past four years, that they'd have a better chance of getting to play meaningful snaps, elsewhere.

The Auburn defense did show flashes of the glory of old, in the first half, before being worn down like an ocean beach by the Tide. The Tigers stood up to the strength of the Tide team, the big offensive line, and held their own for a half. Asking the 2008 Tigers to play a complete game, however, was asking too much. With little help from the back seven, the Tiger defense failed down the stretch.

Special Teams were not bad, but not special, either. It was an ordinary day at the office. On a day where we needed some big scoring plays, none were in the offing from these units.

Offensively, we had our worst day of the year. We knew going in, that our only chance was to spread Bama out, and get the ball to space. Instead, runs to the short side, short passes, and inadequate blitz handling were the order of the day. We knew that we could not give the ball away, and yet we did, repeatedly, leading to a third quarter avalanche of points.

Grades, after the jump.

Defensive Line: C+. On a day when we HAD to win the battle in the trenches against a good offensive line, we did not. There were some outstanding individual efforts here and there, Coleman knocking down an early pass, a couple of sacks, a few drive-killing tackles for loss. Overall, though, the line managed only 5 tackles for loss, and one quarterback hurry. And in the big picture, Bama ran the ball 50 times for 234 yards, a 4.6 yard per carry average.

Linebackers: F. Alabama ran the ball 50 times, and the Auburn linebackers only came up with 18 total tackles, none for a loss. And several of those tackles were on special teams. Our linebackers failed utterly, being bowled over by tight ends, pulling linemen, or just completely missing runners. Often, even after 12 games, guys lined up wrong, and took bad pursuit angles. Overall, it was a horrendous performance.

Secondary: D+. The secondary had to make a LOT of tackles down field, and at times, coverage was good. There were times that tackles weren't made, though, and it resulted in Glen Coffee and Mark Ingram galloping through a sea of white shirts for touchdowns. It was good to see more of an effort being made to play up, and limit short passes. However, there were times when the coverage let guys go, for long passes, such as McFadden turning Nikita Stover loose for the first third quarter touchdown, and Neiko Thorpe losing Marquis Maze for the last TD. Jerraud Powers matched up pretty well, with superstar freshman Julio Jones, holding the giant to three catches for 36 yards. Powers gets a big demerit, though, for dropping a sure interception.

Punting: B. Other than one shank that set up Bama's first TD, Clinton Durst had a pretty good day, with a 42.6 yard average. He was roughed up a couple of times, too, that weren't called. Durst had two punts pinned deep, and another that should have been. Coverage was good, too. On nine punts, weapon Javier Arenas only had two returns, for 20 yards.

Punt Returns: C+. Robert Dunn returned two of Bama's five punts, for 19 yards. Points off for tripping over a yard line, and falling, untouched. Blocking was pretty decent, but Dunn ran the wrong way once, right into traffic.

Kickoff Returns: C-. Due to the high score, this unit had a lot of chances, and did little with fairly short kicks. The team posted 122 yards on 7 returns, a paltry 17.4 yard average. It seemed that both Davis and Fannin were determined to run RIGHT AT the first Bama man down the field. Davis posted a long return late, nearly breaking it for a touchdown, but that one was called back on a really stupid personal foul by Darvin Adams, completely away from the play.

Kickoffs: A+. I'll bet no Tiger fans thought we'd get an A on anything, in that game! We had only one kickoff, and Morgan Hull BOOMED it through and out of the end zone. That's 80+ yards, folks. Great job! Carry that over to next year, please?

Placekicking: F. On the one that counted, we allowed a ton of penetration, and Hull kicked it low. We only had one chance to kick, and we let Saban's timeout totally discombobulate the unit. Fail.

Offensive Line: C-. This unit faced a hefty challenge, facing a HUGE defensive line. For all the terror over Terrence Cody; Bosley, Green, and Berry limited him to just three assists. The Bama starting 3 on the D-line tallied just six total tackles, and two sacks. The line had only one penalty, a late false start on Tyrone Green. For the most part, the line blocked who they had to block, and held their own. On run plays, however, the line completely failed to get any sort of push. While they Tide unit wasn't a tackling machine, or pass rushing terror, they controlled the line of scrimmage, and made inside runs nearly impossible. I think Jason Bosley was responsible for the lost snap fumble, as the ball never appeared to make it through his legs, back to Burns.

Receivers: F. The receivers only caught 6 short balls, all day. There were failures to make route adjustments. Several drops by Derick Winter. A failed bomb for Swinton which was catchable, but Swinton didn't fight for it. Dunn had a drop on an out route. Rod Smith failed to bring in a deep bomb that was within reach. The receivers didn't get open, dropped half of the few balls that got to them, and even blocked poorly. Bama corner-blitzed about a third of the time. When that happens, both the receiver and the quarterback HAVE to check to a quick pass. Burns tried that early, and Smith wasn't even looking for the ball. Those blitzes were obvious, because the corner slid inside every time, well before the snap! Furthermore, frequent corner blitzes are a slap in a receiver's face. It shows that the defense has no respect at all, for the receiver. Terrible day by the receiving corps, all around.

Running Backs: D+. Losing a fumble is a letter grade penalty, so we START from a C grade, due to Lester and Fannin's fumbles. Lester's was particularly galling, because he wasn't even hit. Blitz pickup was generally pretty good, as Alabama was sending more people than we could block. There was always pressure on Kodi, but the backs pretty much neutralized the man they had to block. Running was tough, mostly inside, against big strong Bama linebackers who were waiting for it. Our longest running back run was 8 yards, and as a unit, they only averaged 2.8 yards per carry. 2.8 won't get it. Out of the backfield, Fannin broke a couple of good screens loose. We did not try that strategy against big Bama blitzes, NEARLY enough.

Quarterback: F. Kodi made a few good throws, and had a couple of good runs near the end of the first half, but had more bad throws that had no chance for the receiver. Kodi failed to manage the game well. A lot of that may have had to do with the poor offensive game plan, but the quarterback MUST make pre-snap adjustments. When the corner slides over before the snap to blitz, that's the quarterback's man. There's not going to be blocking help. You're not going to have much time. You've got to check, either into a quick hitter into the vacant zone, take off and run the other way (ESPECIALLY if the blitz is coming off the short side), or check into a draw. We ran right into the blitz, or tried a 5 step drop, or threw the ball out of bounds. In the second half, trailing big, Kodi Burns only managed to ATTEMPT 8 passes.

Overall, we had no chance on offense, partly due to a poor gameplan, but mostly due to terrible play by the skill players. Three consecutive fumbles to start the second half is the mark of a Fulmer team in big games, not an Auburn unit! On defense, we played well up front, for a while, but the D was on the field too long, and needed some tackling help from the back seven at the point of attack. Did not get the needed help. Special teams were passable, but did not bring their best to the biggest game of the year.

All in all, it was the worst Iron Bowl performance since I've been watching them, and it came against a very good team that limits mistakes. It's time to put this game in the ground, bury it, and move on to next year. There will be lots of debate as to future Auburn plans, but that's a subject for other posts. For now, I'm glad this dismal year is over. War Eagle, and thanks to all of the fans who've hung in this far!

It's great to be an Auburn Tiger!