How the Auburn Offense Declined.

Share All sharing options for: How the Auburn Offense Declined. 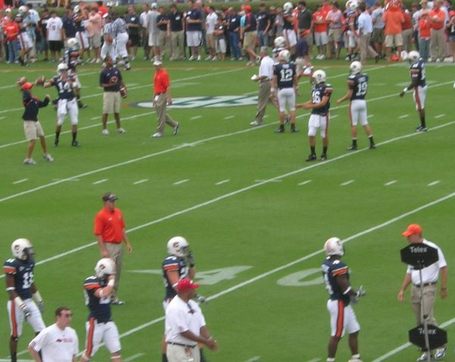 Who's going to be playing on Sunday?

War Eagle, everyone. As we grind along towards a probable losing conclusion to this F. O. R. D. season, (or as the Joe Cribbs Carwash has decided: the 2008 Season of DEATH.) A look back on the real culprit of the disaster is in order. That culprit is, of course, a lack of playmakers on offense, at the skill positions. Arguably, we haven't had a freshman star successfully integrated into any playmaker role, since as far back as 2002. That's a long time in an SEC football program! We'll examine the history of skill player recruiting under the Tuberville administration, today.

At Ole Miss, and at Auburn early, freshman stars played early. Tuberville and his staff brought in some good ones, and put them on the field from the get-go, in Noel Mazzone's spread-out high-tech offense. Ole Miss featured such freshman stars as Grant Heard, John Avery, and Deuce McCallister. When Tuberville arrived at Auburn, wide receivers Ronney Daniels, Tavarious Robinson and Marcel Willis all played prominent roles as true freshman. Daniels, in particular, had one of the best seasons in history for an Auburn receiver. In 2000, Tuberville brought in rookie Rudi Johnson, and we saw how well that turned out. Deandre Green, Jeris McIntyre, and Robert Johnson made freshman impacts in 2000, also. In 2001, it was Carnell Williams, Jay Ratliff (a tight end, that first year) and Silas Daniels on the field early. In 2002, Tuberville took Auburn to Los Angeles, and started true freshmen Devin Aromashodu and Ben Obomanu at wide receiver. And who can forget Trey Smith's freshman performance against Bama, in the 17-7 shocker, Tumbled in T-Town?

In 2002, Auburn offensive excitement hit a new peak, as Bobby Petrino was coming in with a heck of a reputation. Alabama's Mr. Football quarterback Brandon Cox was coming in, and we signed Devin Aromashodu, Ben Obomanu, Anthony Mix, and Courtney Taylor, arguably the deepest and most talented receiver class in Auburn history. Then, something changed. Since 2002, it's been awfully rare to see a newcomer given the opportunity to shine. It took an injury to Rod Smith, last Saturday, for Chris Slaughter to get a serious look, and Slaughter responded with the best receiving game since Ronney Daniels.

After the Nall-ball fiasco in 2003, we struggled. I can, and have argued that the Nall offensive failure was due largely to dropped balls, but that's a subject for another column. This one focuses on recruiting.

Skill player-wise, 2003 was an absolute bust of a year, largely due to the departure of Bobby Petrino. Of all of the skill signees, the only ones who made any significant impact were Cole Bennett, and Carl Stewart. hardly electric playmakers. Bruce Edwards took his 4.4 speed to the baseball diamond. Kelcy Luke, Courney Denson, Ken Williams, and Kevin Williams rounded out the skill class of freshmen, and none made it through school. Some never even made to campus.

2004, was a tough recruiting season, even with the reaffirmation of Tuberville as our coach, and the hiring of Al Borges. Tuberville had survived Jetgate, but playmakers with options had already settled for a more stable situation elsewhere. Freshman skill players brought in were: Calvin Booker, Blake Field, Brad Lester, Mike McLaughlin, Jerald Watson and James Swinton. Rod Smith was an unsigned walk-on. Of those signees, only Brad Lester has made any significant contribution. The 2004 13-0 season was a great waste, as a recruiting tool. The only freshman to get significant playing time was Jerald Watson, who had his small frame run up the middle on most plays with a big Auburn lead. Watson transferred. At this point, recruits began to realize that Auburn was no longer going to play them early, and if they did, it was not going to be any sort of real offense. Failing to continue to run the full offense with those leads, was a BIG, big mistake! If you came to Auburn, you were going to toil in obscurity for 3 years or so, before you got any chance to do much.

In 2005, the message sent by the offensive staff during the 2004 season was realized. Despite a perfect season, we signed Montez Billings, Robert Dunn, Andrew McCain, Gabe McKenzie, and Tommy Trott. Prechae Rodriguez was a Juco signee. Again, no big time game-breakers. This was NOT a class one would expect, after a 13-0 season! We blew it, sitting on those leads... If not for Kenny Irons (a transfer), I think we'd have struggled a lot more, a lot sooner. Robert Dunn was one with the speed to contribute early, but it didn't happen.

2006 saw slightly better results, after again leading the SEC in offense in 2005. We signed Neil Caudle, Steven Ensminger, Mario Fannin, Michael Goggins, Tim Hawthorne, Alex Rose, Ben Tate, Chris Slaughter, and Terrell Zachary. Slaughter failed to qualify, but resigned in 2007. Those guys had some potential, but were hardly on par with some of the other SEC classes. We signed Caudle. Other schools were signing Tebow, Harvin, and Stafford. Ben Tate saw the only significant action, you guessed it, running it up the middle every late down, on the non-conference cupcakes.

2007 featured Kodi Burns, Quindarious Carr, Enrique Davis (didn't make it, now with Ole Miss), John Douglas, Chris Slaughter (re-signee), Bailey Woods, and and Brent Slusher. With the exception of Kodi, this was not a star class either. By this time, the talent drain was now in full effect on the field. Brad Lester was an electric player, when he wasn't hurt or suspended. Otherwise, we couldn't get open, couldn't run away from people, and couldn't throw it far down field. At one point, we were desperate enough to pull the redshirt off of a true freshman quarterback to have him run the read-option and quarterback draw.

2008 sported Darvin Adams, Harry Adams, Reggie Hunt, Phillip Pierre-Louis, Eric Smith, Vance Smith, Barrett Trotter, Derrick Winter, and DeRon Furr. Decent group, but hardly SEC-leading signees. The best of them, Pierre-Louis, got hurt on the first play of the season. Winter and Adams have played sparingly, but never looked to seriously. Eric Smith has played the most, due to our MASH-unit running back corps.

This year, we have some stars lined up, if they stick. But, we'll continue to struggle, unless there's some sort of commitment to playing real offense, not sitting on leads, and getting the stars the ball, with opportunities. Ask yourself this: since the star class of 2002, which Auburn skill player signees are NFL material? The answer: Only Brandon Jacobs and Kenny Irons, and both of them were transfers. Bottom line: we haven't signed an NFL-caliber skill player, as a freshman since 2002.

While our conservative play-calling style has won a bunch of games over the past six years, the well is now running dry. We need to return to Tuberville's early head-coaching roots, where stars can come in and make an immediate impact. Until we do that, we'll struggle every year on offense. I believe Tommy Tuberville knows this, and it's why he's made recruiting skill a job requirement, for his next offensive coordinator.