Share All sharing options for: Tough Decision Ahead For Auburn President Jay Gogue 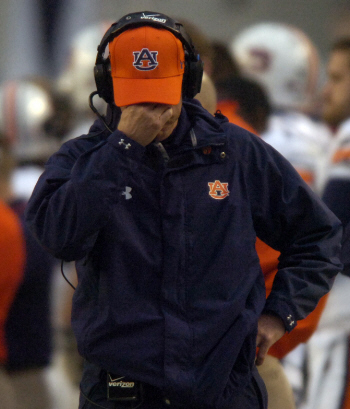 Is Tuberville best for Auburn's future?

In the next 48 hours the direction of Auburn's football program will be determined. After suffering the worst loss to Alabama in 46 years you can bet Tommy Tuberville's conversation with Auburn President Jay Gogue will be frank and pointed. It's been widely assumed for the last month that Tuberville will return next season. Today things are less clear.

Rarely does the winner of this game assume complete control of football in the state of Alabama. This year is the exception. This Alabama football team out-played, out-coached and in the end, simply manhandled a much inferior Auburn unit. The contrast between the two teams is startling. Say what you will about Alabama's struggles over the past decade; this program now has everyone in lockstep with one goal and that's to win a national championship.

A week ago I would have taken any bet out there that Florida would crush Alabama this weekend. I've since seen the light.  This Alabama team and more significantly, this program is very much the real deal. This is sobering news for an Auburn program that has held sway in the state for the better part of ten years.

In simple terms, Nick Saban has out-performed Tommy Tuberville on the field and off for the past two years. He's done it on the recruiting trail, and with the coaches he's hired and the money he's generated for the university. It's naïve for anyone to believe that Tuberville can wave a magic wand and reset the calendar to 2004 anytime soon.

I've been outspoken in my support of Tuberville. He's been the perfect ambassador for the university. He's won on the field, his players have stayed out of trouble and they perform in the classroom. It would be hard to ask much more from a coach than what he's given Auburn during the past 10 years.

But the future of this program is not about the past. It's about tomorrow and that's an ugly picture at the moment. Tuberville has taken his eye off the ball and it will cost some of his friends their jobs - perhaps this week. It's not something that will be fixed quickly. This is a very bad football team. With trips to Baton Rouge, Knoxville, Fayetteville and Athens, things will be much tougher in 2009.

Auburn will welcome back an offense that has zero consistency at quarterback, tailback or wide receiver. It brings back an offensive line that can be described as nothing short of horrible. You can hire the best offensive coordinator in the country and it will be difficult to win with this talent.

This is not a one year job. This week's discussion should not be about giving Tuberville another season, but rather do they have faith he can rebuild the program over the next couple of years. With the team in its current state, it's hard to see things getting significantly better next season.

Do Auburn officials, alumni and fans have a strong enough stomach to go through this process with Tuberville? I'm not so sure. When you are paid $3.5 million annually, you don't let a program get away from you. And you certainly don't lose by 36 points to a team you've owned for the past six years. Saturday was no aberration. Alabama passed Auburn so quickly that none of us saw it coming. This falls squarely on the shoulders of Tuberville.

Does he deserve another chance? Perhaps. Would it be an outrage if he were fired this week? I'm not so sure anymore. Florida's Urban Meyer and Saban built national championship contenders within two years of their arrival. Two years. Auburn can't live on 2004 forever.

The Tigers are 14-11 over the past two seasons, with a 1-5 record against LSU, Georgia and Alabama. Even more worrisome is the team's 4-4 record during that time against Miss State, Vanderbilt, Arkansas and Ole Miss. For this effort, Tuberville has collected nearly $7 million in salary. This is real money - not the Monopoly kind.

When you command this kind of money, school officials and alumni have a right to ask what have you done for me lately. For Tuberville, it will be tough to answer this week. This is not a middle manager corporate job where a few mistakes can be tolerated. This is a job that drives the engine of an entire university. This engine has passed the 100,000 mile point. How many more does it have left before totally breaking down?