NEWS BULLETIN! Gene Chizik To Be Named Auburn's Next Coach

Share All sharing options for: NEWS BULLETIN! Gene Chizik To Be Named Auburn's Next Coach 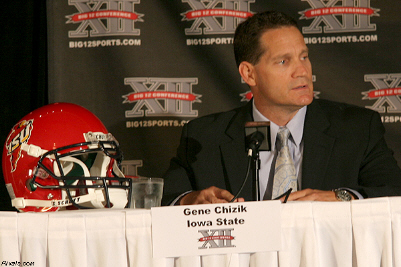 Just when you thought you'd seen it all...

Various media sources around the state are now reporting that Iowa State Coach Gene Chizik will be Auburn's next head football coach. The former Auburn defensive coordinator has spent the past two seasons as coach at Iowa State where he's compiled a record of 5-19, including 10 straight losses to end this season.

To say this move is shocking is an understatement. For many Auburn fans, this is a worst case scenario. There appears to be little logic in the choice. A press confererence introducing Chizik as the new coach could come tomorrow.

Below are the links from two Auburn sources. We'll keep you updated as things happen.