Jacobs and Gogue Sit Alone On An Island Today

Share All sharing options for: Jacobs and Gogue Sit Alone On An Island Today 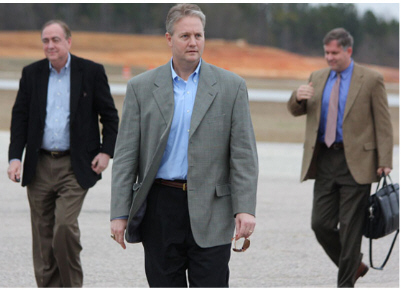 The fallout from the hiring of Iowa State coach Gene Chizik continues today. Criticism is coming from all corners of the country and prominent Auburn people are already starting to distance themselves from embattled President Jay Gogue and Athletic Director Jay Jacobs. The backlash is so bad on this Sunday that many still wonder whether tomorrow's much anticipated press conference will actually happen. Unfortunately, it appears the hays in the barn - the Gene Chizik experiment is underway.

This morning former Auburn coach Pat Dye is already distancing himself from the hire, saying point blank that the hire is all on Jacobs. Former All-American running back Joe Cribbs said the hire was "interesting." Former Tiger lineman Cole Cubelic was more direct, ""I have a lot of respect for the guy (Chizik). But you look at his record as a head coach and you have to scratch your head and wonder what Auburn was doing and why they think it's a good move,"

Legendary kicker Al Del Greco refused to even comment. There are few takers on the Jay Jacobs train today.

Many questions are still to be answered.  Who really pull the trigger on this hire? Was this Jacobs and Gogue's decision alone or did the Board of Trustee have input? Can Gogue and Jacobs survive what many are calling the most inept hire in college football history? Will Tiger fans ever really embrace a coach that's short on personality and is perceived as Auburn's version of Mike Shula?

As we've said all along, there's a massive leadership vacuum at Auburn University. Auburn people need a leader to emerge, someone who can wrestle power from those who've torn down the place we all love. It won't be easy. It won't be pretty. But now is the time to act. It's time for Auburn to take back their University. Let's hope and pray on this Sunday that a leader emerges that can move Auburn forward.