Share All sharing options for: A New Era Begins Today In Auburn 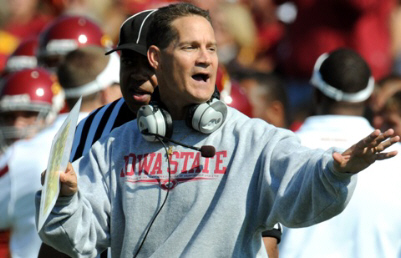 Gene Chizik will be introduced as Auburn's new coach this afternoon.

Unbelievable. Unprecedented. Unfathomable. It's not easy to find words to describe the events of the past two days. The Big One has hit Auburn University. It would be inaccurate to say the Auburn family is split. It's not. Auburn people are very much united in their disgust and dismay over the hiring of Gene Chizik as the Tiger's next coach.

If Auburn were a form of government it would be a dictatorship. What has been taking place for more than a quarter of a century on the Plains has finally come to a head. Like it or not, Auburn is not your university and it's not your football team. You can be a fan and a proud alumnus; and you can give money to Tigers Unlimited. But just understand this: Auburn is not your school. It's not mine. We love it and we care deeply about it, but right now it belongs to someone else.

It belongs to a handful of people who don't care what you think or how you feel. To them, the Auburn Spirit is nothing more than a slogan for a television commercial. Real Auburn people don't mistreat a coach who gave back as much as he received. They don't drag good families through a week of hell at Christmastime. Real Auburn people don't board planes in the cover of darkness to stab good people in the back. This is not the Auburn we grew up loving.

Perception is reality. Today's perception is that Auburn is not a very good place to be. How Auburn people handle the next few years will likely go a long way in determining the future of its university and football program. It will be difficult. How do you take on a board of trustees without tearing down the University? How do you support a football program that you love and not continue to empower those who don't have your best interest at heart? There are no easy answers.

Auburn has many powerful and distinguished alumni. I'm continually amazed that not one of them ever takes a stand against those who continue to embarrass the place we love. This institution is begging for a public figure today to unite the Auburn family. Let's hope this weekend is a catalyst for that to happen.

With all of this as the backdrop, Auburn welcomes (for lack of a better word) its new head coach today. In a sign of the times, today's introductory press conference will be closed to the public, something that has not happened in Auburn's history. Chizik will assume a challenge that is perhaps not winnable considering the circumstances. And that's unfortunate.

As Auburn people we must find a way to get behind this young coach. We must remember this is not his fault. He was offered his dream job and accepted it. We'd all do the same thing if we were in his shoes. Mentally it won't be easy for most to accept Chizik. But it's imperative that we all do.

He's coach of the school we love and because of that we must give him the benefit of the doubt. The odds are long and the mountains are high; but Auburn people aren't quitters. And we can't quit on Gene Chizik before he starts.