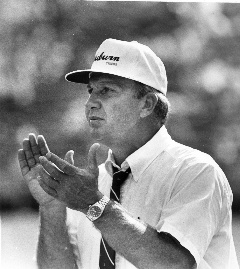 Dye speaks out in favor of Chizik.

I received this in my inbox a few minutes ago. It's a letter from former Auburn football coach Pat Dye to Tigers Unlimited members. I thought I'd share it with you...

This is a very emotional time for the Auburn family. We all have our own opinions about what is best for Auburn and about the impact that Auburn decisions will have on our lives.

I don't expect everyone who reads this to agree with everything I say, but I just want you to know what I feel in my heart.   This time of transition we are going through now reminds me of the time in 1981 when I walked into a room full of football players who had many questions and doubts about me coming in as the new head football coach.

Their frustration showed in their faces, and anxiety was in their eyes because of the unknown. I had a simple message: Whether they had come to Auburn for the right reasons or the wrong reasons, they had chosen to get their education and to play football at Auburn University, which would lay the foundation for the rest of their lives.

Unless you have walked in their shoes, you cannot begin to understand all that is involved in the process of making these decisions.

In addressing the current situation pertaining to our Athletic Director, Jay Jacobs, and his decision to hire Gene Chizik as our new Head Coach, I applaud all parties involved in the process for allowing Jay Jacobs to do his job.

Nobody is more qualified to make this decision than Jay. He is a true Auburn man to the bone and understands better than anybody the kind of man we need to lead our football program into the future. Gene Chizik is that man.

Because of the years I was involved in football - as a player, an assistant coach, a head coach, and as a part of teams that won championships at every level - I learned something about winning. One thing I am sure of is that I know what it takes to win. Teams where everyone played with the same heartbeat had a chance to win championships; teams that were not able to play like that never reached their full potential.

I know winning is important to the Auburn people. But so is character. Jay Jacobs has it and so does Gene Chizik. Now we'll see if they can win. They are our team. I like it. War Eagle.