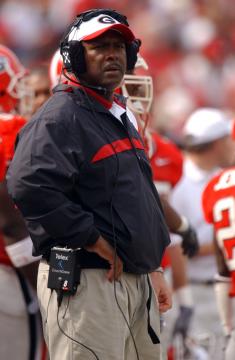 Lose the hat, come back!

As Mean Gene is on the road recruiting this week, very little is coming out about his potential staff hires, including the all-important coordinator slots. I've got a great idea to bring some positive press attention our way--call Rodney Garner back home immediately. Offer him DC if you have to. His alma mater needs him desperately, especially in his chosen field of expertise--recruiting. Other than a Jacobs resignation, this could be the best news we could hear by Christmas.

Never mind the politics involved in such a hire: Garner himself interviewed for the position that was ultimately given to a coach popularly deemed less deserving than almost all the candidates. So what? Here's a good chance to move up, if he's granted DC, or at least make a lateral move back to his alma mater, where his services are greatly needed. Hell, have his old coach Pat Dye write him one of those Dye letters we're seeing if that'll help motivate him. Also, what about it being potential on-the-job training for a step up to head coach? I'm very confident that Garner might have had a serious shot as our HC if he had coordinator experience on the resume. If he climbed up the ladder to that position at Auburn, he could be in a great position to one day succeed Chizik.

There were always hushes and rumors why Garner left his recruiting coordinator position at Auburn under Bowden to go to Tennessee. Some said that his efforts might have been a little bit, how do you say, zealous? Who knows for sure. Garner was with the Vols for two years, but had landed at Georgia by 1998 under Jim Donnan. He's flourished at Georgia, not only surviving as recruiting coordinator under Mark Richt, but being promoted to assistant head coach as well. But curiously, after the Auburn administration flipped over to Tuberville in late 1998, no one ever gave Garner serious consideration to bring him back in spite of gradually making a name for himself as a recruiting dynamo. It's rumored that the main reason was that 'zeal' we mentioned earlier and that Tubs was under strict orders to run a clean program. What leads me to question that excuse is the fact that if anyone out there is perceived to run a cleaner program than Tuberville, it's Richt. It's highly doubtful that Richt would allow such shenanigans to run amok under his program if the rumors were in fact true.

And a secondary factor for making such a hire is that you remove him from one of your biggest competitors. Let me tell you, Georgia is very fearful that Auburn might try to hire away not only Rodney Garner, but former Auburn tackle Stacy Searels, too. Searels is Georgia's current offensive line coach and has been doing a fantastic job there by all accounts. A loss of Garner might also break the Bulldog's recent lockdown of the talent exodus from the state.

Since recruiting classes have started to be ranked, Garner has only put together quite a few top 10 classes for Georgia. Most would consider him to be the perfect counter-weight for Saban's efforts out of Tuscaloosa, especially with Garner's all-important inroads in the Atlanta market. Just as football the game is about momentum, so is football the program. Perception IS reality for most folks, and the collective mood about a particular program can be altered just by how people interpret certain events, sometimes even leading to self-fulfilling prophecies. Publicity-wise, Auburn is in desperate need of some positive news coming out of the football program to give them some momentum, and hiring Rodney Garner could serve as our fumble recovery deep in our opponents territory late into the 4th quarter...