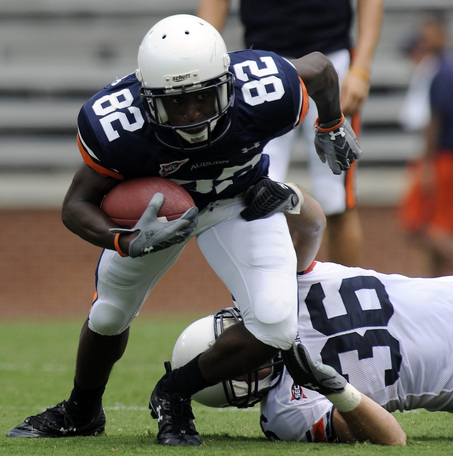 We aren't sure who'll coach 'em,

But here's who we'll likely have coming back. I'm designating what class they'll be, next season.

Gone: No one graduates, but Gabe McKenzie is likely to stay on offense

Depending upon who enters the NFL draft, the Auburn defensive line could be outstanding. The loss of Marks would definitely hurt, because none of the other returnees has shown any great ability to disrupt in the middle. While Coleman will likely be a preseason All SEC if he returns, Auburn should have more speedy pass rushers available in 2009, than in the previous year, even if Coleman leaves.

A thin Auburn linebacking corps took a blow, in 2008, with the loss to injury of Tray Blackmon. If Blackmon returns, and stays in the lineup, the unit's prospects look respectable, with likely playing rotation help from Eltoro Freeman, who should contribute immediately. Auburn needs to infuse this unit with a serious dose of aggression, in the off season.

Auburn has six veterans returning to fill two slots plus a nickel back position. This should be an area of strength, after the unit was tested under fire this season.

While McNeil and Etheridge led the team in tackles, it's the ones they missed that we remember. They were often out of position, or a step late. It would be really helpful for those two to go through another off-season of teaching from Paul Rhodes, who we should really hope will stay.

Auburn is in the unusual position of having three returning punters with experience. I'd be shocked if at least one of them isn't considering transferring. All three have the ability to play at the major college level. Durst won the job in 2008, and settled into being a pretty good player.

Chris Slaughter does have experience making good fair catches, but has hardly had any actual returning experience. Auburn was looking at Pierre-Louis last fall at this position, before the knee injury. Assuming that the knee heals properly, Pierre-Louis gives Auburn a possible play maker in the return game.

Pierre-Louis took the first kickoff of the year in 2008, tried to hurdle a tackler, and was lost for the season. He'll get the shot again, if his injury heals. Mario Fannin has experience, providing several electric return in 2008.

These two kickers will likely split the duties, with Byrum place kicking, and Hull handling the kickoffs. Another off-season should help both players.

Rather than list this by position, I've lumped 'em all in together. There'll likely be lots of movement, as there has been for the past few years. Auburn has a number of capable veterans returning, but they need to get back to the toughness, strength, and attitude of years prior to 2008.

Trott (depending on surgery recovery) and McKenzie form a talented, veteran tandem of tight ends. If Auburn is going to have much of a running game in the future, though, some depth needs to be developed.

From the scout team: Phillip Pierre-Louis

Billings is the only consistent performer returning. There are a lot of bodies returning, but they need coaching. Tuberville was evidently counting on Pierre-Louis as his break-away threat, which ended with an injury on the first play of 2008. Whoever coaches this bunch, will have their hands full.

While spread teams often have only one back, or no backs in the backfield, a good fullback is necessary for knocking out those tough short-yardage situations. With another 20-25 pounds of muscle, Douglas could be the prototypical SEC fullback. We also need to develop a backup.

While Tate, Fannin, and Smith form a pretty good rotation, McCalebb is said to be a STUD. Auburn should be, once again very solid at running back. As usual, it's a question of who is going to block for them, and open up those running lanes.

It's difficult to say which direction this 4-player competition will take. With a new coordinator coming in, it's really up in the air. Burns has the most actual playing experience, but it will probably depend upon who learns the new man's system the fastest.