Tuberville Discussions Spiral Out of Control

Share All sharing options for: Tuberville Discussions Spiral Out of Control 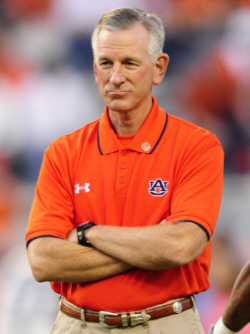 Just as sure as they put up the Christmas tree each year at Rockefeller Center you can count on there being controversy in the Auburn Athletic Department. Or so it seems. The saga of Tommy Tuberville continues tonight on the Plains.

The discussions between Tuberville and athletic director Jay Jacobs appears headed for another round of meetings on Wednesday. After talking for several hours in Tuberville's office on Tuesday, Jacobs, doing his best Punxsutawney Phil impression, emerged from the athletic department late in the afternoon to announce that talks will continue between the two men stuck in the middle of this ever growing debacle.

The most amazing thing about this entire process is the secrecy surrounding it. I have talked to no one close to the program who has any idea where this thing is headed. Early Tuesday, all signs pointed to Tuberville being on the way out. Later in the day, opinion seemed to shift.

This much is certain. Auburn President Jay Gogue's handling of this issue is starting to draw questions about his own leadership skills. Like it or not, how you handle the football program goes a long way in determining how long they let you live in the President's Mansion. Gogue's stock is in free fall tonight.

Auburn's lack of leadership in the athletic department continues to rear its ugly head. Just when you thought things couldn't get any worse than last year's Arkansas hunting trip adventure or the quick departure of Will Muschamp, Jacobs goes and tops himself.

It's time for someone, anyone to step in and stop this madness. Make a decision and get on with it. Can Tuberville really continue to operate at the level he needs to after this drawn out affair? It's not fair to him or the players. Nobody needs a week to make a decision when they've been sitting around a table hour after hour starring at one another.

It's time to fish or cut bait. Apparently, that's easier said than done.

We'll continue to keep you updated on any developing storylines. Tomorrow morning we'll look ahead at who Tuberville might bring in as offensive coordinator should he be retained.