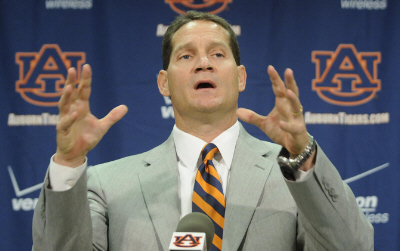 Give Chizik an "A" for effort.

Happy Holidays and Good Monday Morning. Christmas week is finally here.  I hope you are getting some much needed time off to spend with your family. It still seems weird to not be talking about a bowl opponent. Then again, what hasn't been weird this year?

The big news on the Plains this weekend was the hiring of former Tiger defensive coordinator Paul Rhoads at Iowa State. I guess that shoots to hell Gene Chizik's theory that you have to move to Texas to land a head coaching job. Good for Rhoads. He's a quality individual and one of the best defensive minds in college football.

What happens if he has more success in Ames, Iowa than Chizik has at Auburn? Will that be enough to run Jay Gogue and Jay Jacobs out of town? And where's all the screaming about Iowa State not hiring a minority for its job? Oh yeah, all the screaming was done by our guy, Charles Barkley.

Don't be surprised to see former Auburn assistant Don Dunn follow Rhoads to the Big 12. They've been friends for years and coached together at Pacific many moons ago.

You may not have liked the hire, but you have to give Chizik credit. The man has hit the ground running. When he said he was leaving to recruit after his introductory press conference, he meant it. The guy has been a machine on the recruiting trail, reaching out to as many commitments as he possibly can. He's even dropped in on a couple of new faces.

Over the weekend, Chizik paid a visit to Alabama's Mr. Football, Clint Moseley. The quarterback has not received an offer from Auburn, but that may be about to change. He's someone that both the Tigers and Alabama have stayed away from until recently. Not surprisingly, Alabama has taken a second look after Chizik expressed interest.

Former Auburn running backs coach Eddie Gran is rumored to be in talks with Tennessee. It's believed that he met with Volunteers coach Lane Kiffin this past weekend. I always held Gran in high regard. I still believe he's one of the best position coaches in the conference.

A change of scenery might do him well. Speaking of assistants, I still can't understand why Chizik hasn't tried to retain linebacker coach James Willis. I thought he did a great job this year developing some of the young talent on that side of the ball. He's also highly regarded as a recruiter. Chizik will have a hard time hiring a better coach at that position.

You have to wonder why former Auburn assistant coach and current Troy head man, Larry Blackney didn't get an interview with Jay Jacobs. I know he was involved in the infamous Eric Ramsey case back in the early 1990's and I realize he'll forever be remembered by Auburn people for, "Keep it down home cuz." But that was nearly 20 years ago.  People get less time for murder than what he's been given by Auburn.

As a young sports writer for The Auburn Plainsman in the 1980's, Blackney was the first person I interviewed. If memory serves me correctly, I believe he was coaching quarterbacks for Pat Dye. I was scared to death walking into the athletic department. He was a class individual. I'm convinced he could have won at Auburn. What he's done at Troy is nothing short of miraculous.