Malzahn Hire Is A Game Changer For Auburn

Share All sharing options for: Malzahn Hire Is A Game Changer For Auburn 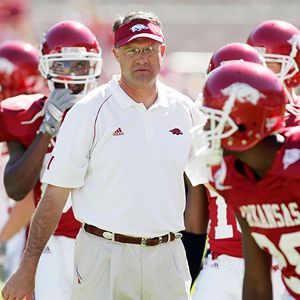 The best in the business? We'll soon find out.

Who says the last Christmas gift is not the best one? With 72 hours left in this dreadful year, Auburn has gotten its best news of 2008. The clouds have parted and this morning Auburn fans again have reason for hope. Of course I'm referring to yesterday's hire of Tulsa's Gus Malzahn as Auburn's new offensive coordinator.

Tony Franklin he ain't. This guy is the real deal and Auburn landing him is a game changer for new Auburn coach Gene Chizik. It would be hard to argue against Malzahn being the brightest offensive mind in college football. Take a look at his numbers over the past two seasons:

Many of you will remember Malzahn's stint as offensive coordinator at Arkansas in 2006. During his tenure in Fayetteville, he helped lead the Razorbacks to a 10-4 record, an SEC Western Division title and a number 15 national ranking.

Prior to coming on the college football scene three seasons ago, Malzahn was a high school coaching legend in the state of Arkansas. He led Springdale High School to two state championship game appearances and captured the title in 2005 when his offense outscored its opponents 664-118 on the way to a perfect 14-0 record.

Prior to his stint at Springdale, Malzahn coached five seasons at Shiloh Christian School where he led the team to back-to-back state championships in 1998 and 1999. He's coached three high school quarterbacks who've set national passing records.

There's a lot of reason for optimism today if you are an Auburn fan. Malzahn will certainly have his work cut out for him, but if there's anyone out there who can make Kodi Burns a quarterback it's him. The Arkansas connection can't hurt things as they get to know one another.

There's no word on other coaching staff hires other than the announcement over the weekend that former Tiger All-American Stacy Searels will not be joining Auburn's offensive staff. Searel's fellow assistant and former Auburn player Rodney Garner is still said to be mulling over an offer from Chizik. Look for an announcement later this week after Georgia concludes its season against Michigan State on New Year's Day.