Share All sharing options for: Auburn Chooses Another Direction 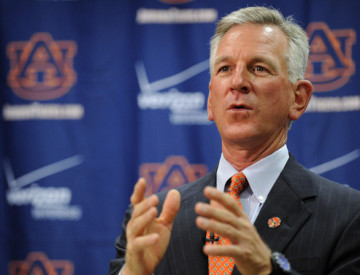 After 10 seasons, Tuberville is out at Auburn.

Update: 8:30 p.m. CT - The shakeout continues tonight following today's firing of Auburn coach Tommy Tuberville. The decision to fire Tuberville apparently happened so quick that the former coach had little time to notify his assistants of the decision. Eddie Gran is believed to be the only coach in town tonight.

According to Steve Ensminger's wife, her husband was actually sitting in top quarterback prospect Raymond Cotton's Maryland home when he got the word. Cotton's father later told Phillip Marshall that his son is no longer committed to the Tigers.

Amy Ensminger told Inside the Auburn Tigers Radio this afternoon that, "she was afraid that some Auburn people aren't going to be happy until the Tigers start recruiting like Nick Saban does at Alabama by putting money into the hands of recruits."

Needless to say, this isn't a red banner day for Auburn Athletics.

Auburn will owe Tuberville "only" $5.1 million as part of his buyout. The clause in the contract calls for the severance to be prorated. University officials will need the extra cash because they now must pay defensive coordinator Paul Rhoads the rest of his $305,000 salary for this year and pay him for next season as well. They also must continue to pay former offensive coordinator Tony Franklin his $289,000 annual salary through the end of next season. The remaining assistants will be paid through next June.

Update: 7:05 p.m. CT - Former Auburn coach Tommy Tuberville had what was described as an emotional meeting with his players tonight at the Auburn Athletic Complex. Neither Tuberville or the players were available for comment. Athletic Director Jay Jacobs will hold a press conference tomorrow at 11:00 a.m. CT that will be closed to the public. Here's the press release from the University tonight...

"The last 10 years have been a great time in my life, both professionally and personally," Tuberville said. "It's been a great place to coach and live, and we've had a lot of success along
the way. I'm going to remain in Auburn and help the Auburn family however I can. I'm very appreciative of the coaches, players, staff and Auburn fans over the last decade."

In 10 years at Auburn, Tuberville posted an 85-40 record and a 51-29 mark in Southeastern Conference play. Tuberville directed the program to eight winning seasons, including a perfect 13-0 mark in 2004.

"Tommy and I have had the opportunity to discuss the direction of the program," Jacobs said. "Through those discussions, Tommy felt it would be in his and the program's best interest to step aside as Auburn's head football coach."

"We appreciate everything Tommy has done for this program, this university and the Auburn community over the last 10 years," Jacobs said. "He has established a strong foundation to build upon and we thank him for the standard he set. We wish Tommy and his family--wife Suzanne, and sons Tucker and Troy--nothing but the best."

The buyout portion of Tuberville's contract will be fulfilled, from which no state or university funds will be used. All assistant and contractual staff will be paid according to their respective contracts.

"I will begin the search immediately for Auburn's next head football coach," Jacobs said. "We will move as quickly and efficiently as we possibly can, but we're going to be thorough and strategic with our search to find the best fit for Auburn."

It's now confirmed that Auburn coach Tommy Tuberville has been fired as Auburn football coach. As WarDamnZach reported minutes ago, sources have confirmed in the last hour that the tenure of Tommy Tuberville is officially over on the Plains. Here are links to various reports around the South...

Auburn also has unofficially contacted both Mike Leach of Texas Tech and Bobby Petrino of Arkansas to gauge their interest.