Gogue and Jacobs Not Up To Task At Hand

Share All sharing options for: Gogue and Jacobs Not Up To Task At Hand 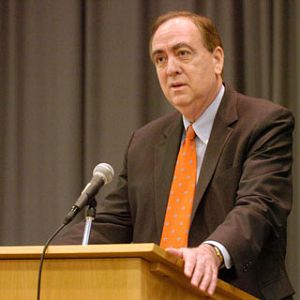 Sometimes even when you see it coming it's still shocking. So was the feeling Monday when the other shoe finally dropped on Tommy Tuberville. In a week where Auburn President Jay Gogue and Athletic Director Jay Jacobs exposed themselves as incompetent lightweights to everyone in the college football world, the announcement of Tuberville's departure felt surreal despite all the warning signs.

Only at Auburn could two men so mishandle a situation and embarrass its fans and alumni the way they have and still retain their jobs. Three days of meetings? Talk about indecisive. What were they thinking? As one reader commented yesterday, maybe they should replace Jacobs with Tuberville.

Jacobs's ineptness throughout his tenure is now showing top to bottom across Auburn's revenue sports. Gogue's first big test on the national stage has been a total failure. He would be wise to study the failings of former school president William Walker.

Hiding inside your office is no way to demonstrate leadership. Gogue has not been seen or heard throughout the entire process. Bin Laden has nothing on this guy. He knows how to cut and run. The lack of Auburn leadership is profound.

Regardless of how you feel about Tuberville's fate, as Auburn people we should all be deeply concerned not only about the direction of the athletic department, but the University in general. Wholesale changes need to be made quickly.

Jacobs press conference this morning should give Jerry Springer a run for his money. It will be interesting to see how he explains this week's debacle. What are the chances that Gogue attends? Where's James Martin when you need him?

Most fans seem to have little faith today that Jacobs can conduct a successful search for a new head coach. The Birmingham News reported yesterday that school officials had contacted Arkansas coach Bobby Petrino and Texas Tech coach Mike Leach to gauge interest. If this doesn't induce nausea immediately, then you don't have a pulse.

Can Auburn officials be so brazen as to go after Petrino despite everything that has happened? Without mentioning Jet Gate, have they forgotten how he treated his team in Atlanta last season? Is this what we want representing our University. Bobby Petrino? The most hated coach in all of football? Are you kidding me? If the reports are accurate, this is truly a disturbing move. Thankfully, because of his contract, there's no way he can leave Fayetteville.

Like the economy, things are likely to get worse before they start getting better. Fasten your seatbelts, the holiday season promises to be stormy. Let's hope that Tuberville is not the only casualty this month.