Who's Going To Succeed Tuberville?

Share All sharing options for: Who's Going To Succeed Tuberville? 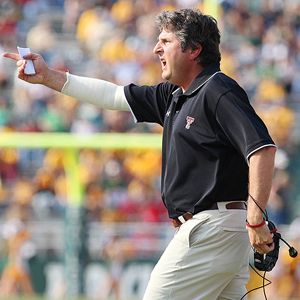 Like I mentioned in the comments yesterday, the Tuberville firing is one of those things that makes me want to take my diploma off my office wall and shove it into a drawer somewhere. Not since Jetgate have I been so utterly disappointed in my school. By turning on Tuberville so quickly, the administration has once again  demonstrated the ruthlessness of college athletics and failed to live up to the Auburn spirit--which includes giving a person a chance at redemption. I thought that Tubs was a true believer of the Auburn faith and we have repaid his loyalty with a knife in the back. And following the sentiments of the other contributors on here, I'm all for a TOTAL house cleaning, which should also include Jay Jacobs getting shown the door so we can get someone in there more adept at such a position.

The next coaching hire is going to be very difficult and comes at a critical time, namely the rise of Alabama and Saban. The AJC's Tony Barnhart devoted a whole column to the subject this morning that should be read by everyone. The jest of it is that if Auburn doesn't knock one out of the park with their next coach, we could be left out in the cold for a while to come.

Gathering up the names of possible candidates to replace Tubs is akin to a goat rodeo at this point. Rumors fly and many players in the game hold their cards closely to their vest, so delivering you accurate assessments will be a work in progress. I'll attempt to run down as unabridged list as I can at this juncture, and please feel free to contribute your own insight, innuendo, and speculations.

First up is a few names MOST of you have heard of:

Mike Leach: Current Texas Tech coach and probably the hottest name out there ever since he took a clandestine trip to interview for the Washington Huskies job this past weekend and put the world on notice that he'll listen to offers. Auburn has made contact with him to gauge his interest.

Bobby Petrino: Was approached non-directly about the possibility. He supposedly has rebuffed any further advances. Whoever's idea this was to approach Petrino considering the history should be fired immediately. That's nothing but a slap in the face to Tuberville. It's mean and vicious. The feasibility of Petrino is practically nil, so this only served the purpose of throwing one last knife at the back of Tuberville. Real nice, whoever did this. Idiot...

Will Muschamp: Just promoted to coach-in-waiting status at Texas to keep him put for a few years. Many suitors were probably going to come calling otherwise. I'm still unsure if his deal is signed yet. Still don't know if he's seasoned enough for a HC job, but I don't doubt this Georgia alum's desire to one day return to the SEC under ideal circumstances.

Houston Nutt: I think he might have been approached unofficially, but probably won't be going anywhere. A third SEC west team in three years might make him look a little too opportunistic and flighty--kinda like Petrino. Besides, Ole Miss would really hate us if we poached our 2nd coach in a row from them...

Steve Spurrier: Ever since his rebirth in Columbia has seemly ground to a halt, Spurrier gets more mentions for SEC coaching vacancies than you get UFO sightings out of  trailer parks. Although I believe that Alabama offered him a job two years ago, I firmly believe that he is going no where, literally AND figuratively, at South Carolina.

Paul Johnson: The new Georgia Tech coach and freshly minted ACC coach of the year. His stock has shot up dramatically and he LOVES to run the ball. Just don't think he's the ship-jumping type, though.

Okay, some names that aren't as familiar:

Jimbo Fisher: Another coach-in-waiting at FSU, and another with some Auburn experience, having been an assistant under Terry Bowden. With Bobby Bowden locked in The Coaching Race of Death with Joe Paterno, can Fisher keep waiting for one of them to kick the bucket?

Derek Dooley: HC at Louisiana Tech, who's enjoyed some success recently, and certainly has the pedigree, being the son of Vince. not sure if he's ready for the show yet...

Brian Kelly: HC at Cincinatti, having a good year after winning the Big Eas(y)t and a BCS Bowl bid. His name is getting a lot of buzz. I don't know much about him yet.

Chris Peterson: HC at Boise State, you know, the team that plays on that please don't adjust your television set field. Undefeated this year and possibly going to a BCS bowl. He might be ready for the big leagues...

Todd Graham: HC at Tulsa. Having some success there. He and OC Gus Malzohn, who himself was mentioned as a possible OC hire for us before the Tubs firing, sure do know how to score some points.

Bill Cowher: Former Pittsburgh Steelers coach, who's name often gets thrown out for college vacancies. Good damn coach, but it's highly unlikley that he would want to go to the college ranks.

Well, that's what I got so far. Will keep you updated as more information filters through. Let us know what you've heard and hopefully we'll get this narrowed down soon enough.