Random Thoughts About A Momentous Week On The Plains

Share All sharing options for: Random Thoughts About A Momentous Week On The Plains 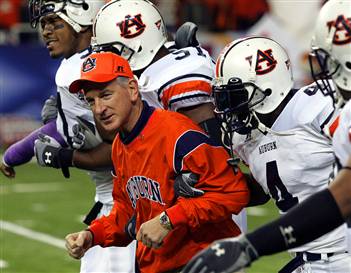 It's been one hell of a ride. Tuberville will be missed.

Like a death in the family, it usually takes a few days for it to hit you. Now I'm not suggesting Tommy Tuberville's departure from Auburn is similar to the death of a loved one, but you certainly feel some of the same emotions. The idea of Tuberville being gone as head coach is starting to be felt by most everyone.

Looking back over the past ten years, one thing is clear: We all had a damn good time. If you're a long time reader of Track'em Tigers you know that I put Pat Dye on a pedestal when it comes to Auburn greats. He restored Auburn to equal footing with Alabama. Few that endured the nine straight losses to Alabama will ever forget what he gave us.

As for Tuberville's legacy, he took things a step further. He gave Auburn fans an opportunity to look down on the Alabama program. For that reason and a million others, he'll always be an Auburn man.

He'll likely move on somewhere else in the coming years and will wear different colors. But regardless of what the future holds for him, he'll always be a true Auburn great. Like Dye was to our generation, Tuberville will always be Auburn's coach to a generation of fans who grew up watching him and learning to love Tiger football because of him.

There are so many good memories that you tear up just thinking about them. Few coaches leave a mark like Thomas Hawley Tuberville has at Auburn. I'd hate to be the guy that follows him.

Athletic Director Jay Jacobs' press conference yesterday is drawing mixed reviews from the Auburn Nation and the college football world in general. I've been shocked at the number of Auburn fans who simply don't believe the story he told to the media. I'm still undecided. I do find it far-fetched that the University would agree to pay $5 million to a coach who quits - just because it's the right thing to do.

I tend to believe what those close to Tuberville are saying today. After three days of talks that went nowhere, he finally threw his arms up and said I'm done negotiating. There was probably relief on both sides and from there the story was formulated.

Knowing Tuberville's character, it's highly unlikely that we'll ever know what truly happened. And that's OK. It's refreshing to not know the sordid details especially after what Auburn fans endured with Terry Bowden a decade ago.

I hope all of you have a great weekend. There's still some football left to be played. Be sure to put on your Florida orange and blue this weekend and support the Gators. We could all use a little good news after this week.  War Eagle!