Share All sharing options for: The Auburn All-Tuberville Team 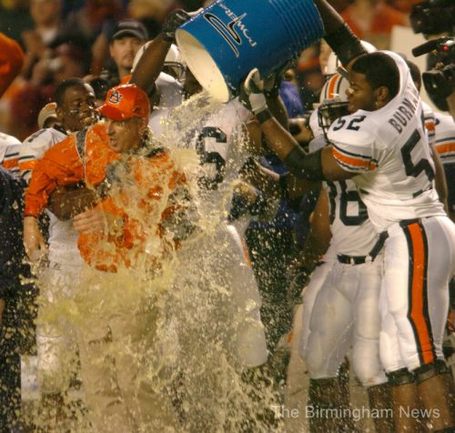 Today, we take a break from our coaching troubles, to look back and reflect on the fine players that Tommy Tuberville coached in his ten years at Auburn. As I looked back, there were a LOT of great young men who sweated, toiled, and worked, to give us 85 wins in ten years. I HOPE I haven't left any obvious candidates out. I went strictly on opinion, and there's no real scientific formula used to select this list. I tried to put weight on players that had made All-SEC, or All-American. In a few cases, it came down to just deciding who I'd pick if I was putting a team together.

It is kind of telling that there are very few players on the list since the magical 2004 season. Receivers were VERY tough to pick out the reserves. There are some good ones, like Tim Carter, Anthony Mix, and Rod Smith, who were left out. Cooper Wallace and Cole Benett were not on the list, either. I felt like Diamond was more consistent, and didn't drop as many balls. At quarterback, I went back and forth between Brandon Cox and Ben Leard. Cox is 3-0 against Bama, and that made it tough. Ultimately, I went with the All-SEC guy. Who would you pick, if you were putting a team together?

This is the best way I could think of, to celebrate ten years of Tommy Tuberville. War Eagle, Coach! We'll miss you!