Who's Better Than Tuberville?

Share All sharing options for: Who's Better Than Tuberville? 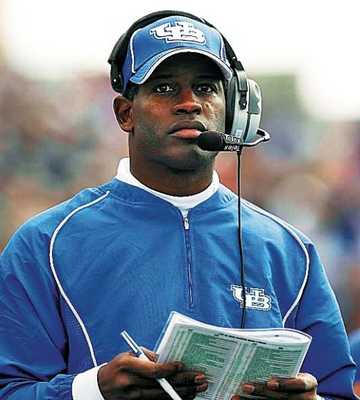 Is Turner Gill the answer?

Editor's note: Today's post is by Kenny Smith. He has worked in numerous media jobs during his career at places such as al.com and Samford University. Kenny is an Auburn graduate and someone who knows Auburn Athletics. Enjoy today's column...

Now that the conventional wisdom on Tommy Tuberville's undoing is taking shape I'm of a few minds. There is a lot of validity in the "Who are you gonna get better?" argument. The other side of that coin is the recent diminished returns and what you should be able to expect for $3 million a year. This is unreasonable expectations versus simple economics. One of the Bama beat writers saw Nick Saban shaken about the Tuberville story. He should be; they all should be. All of this is the downside to the last decade's arms race that the coaches and agents have been building and it inevitably leads to just what Saban said. You're only a 5-7 season away from it. Saban goes 5-7 next year people there start to question that salary too. It is the same untidy thing. At the end of the day, a guy with few peers in the pay grade is expected to be more than mediocre.

Tuberville's problem was either one of apathy or misunderstanding -- and allowing any of those perceptions to perpetuate.  Most damning: he got outcoached seven, maybe eight times this year. Injuries are of course a key, but you're hard pressed to think anything but "For $3 million a year my guy should win games. He should outcoach your guy." The logic persists no matter the salary of the guy across the field. In this light it would have been hard to see giving someone a $200,000 raise for such a performance, particularly when he's already earning $3 million per year. (It keeps coming back to that,  doesn't it?)

The platitudes and the jokes and the soft-touch humor of late probably don't sit well with the right people. Tuberville's quiet calm (buyouts will help give you that) and Saban's roar showed a stark contrast at this year's Iron Bowl. Both styles have their own positives and negatives, but for pure visceral feeling and image you got a powerful message Saturday. In this light of public perception Tuberville was certainly getting killed. In that light everyone was forced to ask "Could Tuberville have turned the team around?" Perhaps. "Quickly?" That's now an open question.

Tuberville has done great things for Auburn. He's good with the media and great with fans. He's been a powerful influence on the lives of many young men. I'm especially proud that he's run a clean, efficient program. He'll certainly be missed in many respects. Tuberville, the man, is a good and decent fellow, but the team was getting lukewarm.

Now. Who do you hire to be the next coach? The next actor in the play has to sparkle. Perhaps it would be Mike Leach, but there's a lot of danger there. That'd be post-modern surrealism beyond Terry Bowden-bad when it comes to titanic personality clashes. An up-and-comer? Not bad if you get the right fella and make him fall in love with the place.

That's possible, of course, but how do you sell this now? In the last decade we've fired the guy who had the highest modern career winning percentage at the school and the fourth winningest coach of all time in the program. We've come to expect a lot for our $3 million a year. It leads to more than challenging expectations. That's where we are philosophically at this point. And now paying Al Borges, Tony Franklin, Tuberville's assistants and Tuberville himself we must look at the real CEO. How much money is tied up in that list? Tuberville, not too long ago, answered a rhetorical question by saying it'd cost in the neighborhood of $2.8 million to build a new staff. Add that to the tally. How much for a new coach? Questioning the fiscal responsibility at play is perfectly reasonable given many of our  years of financial support.

Here's another open question: How long would a Shug Jordan have lasted in this environment? You answer that one and you start getting into emotional contexts like the soul of the place, family versus business and all that stuff that Tennessee is now coming to terms with. Not pretty.