A Squeezed Out Orange Victory!

Share All sharing options for: A Squeezed Out Orange Victory! 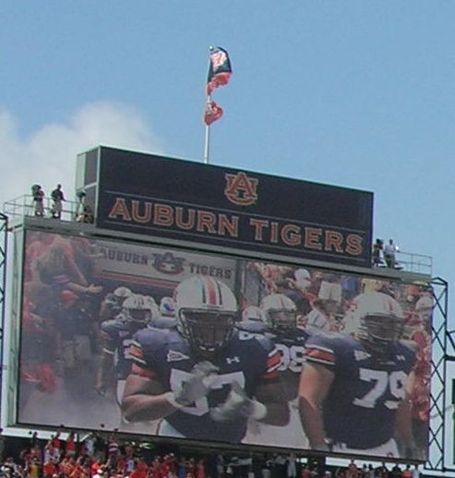 .....Despite another week of offensive inconsistency, the Auburn Tigers pulled out a desperate 14-12 win over a determined Tennessee football team! In a game where BOTH offenses barely managed 400 yards, combined, Auburn failed to break. The Vols had NUMEROUS chances on Auburn's side of the field, but could not finish the Tigers off. The Tiger offense was in disarray. Auburn could hardly throw a pass to a receiver, and those guys were having trouble catching it. Brad Lester and Tristan Davis were out the whole game. Ben Tate was down with a twisted knee. Somehow, seldom-used Mario Fannin and Kodi Burns had Auburn at 3rd and 5 from the Auburn ten yard line.

.....While CBS was running their ten thousandth commercial, Kodi Burns made a clutch pass to Montez Billings for ten yards, just a step ahead of an onrushing Tennessee defender, for a key first down. With only 2:04 left, Tennessee used their final timeout, and Auburn had only to run the clock out.

.....This game was a continuation of Auburn's offensive woes, despite some interesting new formations and offensive innovations. We used a one-back, under center set quite a bit in the first half. The offensive line is still getting penalized at an alarming clip. For the second week in a row, Auburn was held under a hundred yards rushing, despite brief appearances by Kodi Burns, and Mario Fannin, at quarterback. The trio of quarterbacks only managed about 125 yards passing. The drops resurfaced, but only four, this game, and at least one would have been a really difficult catch. In the second half, there were no drops, because the receivers had no chance to even get their hands on some awful passes.

.....Special teams were somewhat improved, mostly by the return of punter Clinton Durst, who brought Auburn's punting average back up over 40 yards per attempt. Kick returns improved, with Mario Fannin averaging 20 per, but the onsides kick possibility is STILL there. We only have three guys on the front line, running backwards before the kick, head turned away from the ball. While Tennessee coach Phillip Fulmer was too tight to call it, someone else IS going to convert another one on us, if we don't get that fixed. Wes Byrum missed a medium-short field goal attempt, and a new problem surfaced on punt coverage: missed tackles. Fortunately, the entire punt team played hard, and Jones was unable to break a big one.

.....The Auburn secondary is even thinner this week, but the walking wounded managed to hold up, against a very inconsistent Vol attack. While Tennessee has a receiving corps every bit as talented and fast as LSU's unit, the Vol quarterbacks were unable to connect. Tennessee had first half success running the football, but in the second half, the door was slammed, by eight Auburn Tigers playing the run. Auburn dared Jonathan Crompton to beat them, and the junior could not eliminate the mistakes.

Defensive Line: A-. Occasionally, Auburn's inside men had trouble with mammoth UT interior linemen. Auburn's ends, however, caused huge problems for the Tennessee tackles. Antonio Coleman and Antoine Carter got several runs at the QB, untouched.

Linebackers: B. In the first half, there was some over-pursuit, which allowed Gerald Jones and Montario Hardesty to spearhead a pair of field goal drives. In the second half, Tennessee's running game ground to a halt, with the exception of one timely quarterback draw on 3rd and long.

Secondary: C+. Bonus points for strong run support, but these guys did not stick to receivers well. Against an accurate quarterback, this could have been ugly.

Punting: B. Not Durst's best game, but even when he doesn't hit it well, he seems to get a roll. Those punting yards were crucial, in this game. The coverage had their worst game of the year, although not catastrophic. Even with a few missed tackles, tenacity was the word.

Punt Returns: B-. No turnovers, but Dunn made a couple of questionable decisions, letting one ball roll 20 yards to be downed inside the ten, and fielding a bouncing ball up around midfield, in traffic. Dunn did keep us out of coffin corner territory twice, with good fair catches.

Kick Returns: C. While 20 yards per return is respectable, the security of the front line is still in question.

Kickoffs: C. Auburn was pedestrian, here. Dennis Rogan ran north and south behind strong blocking, for about a 20 yard average. Morgan Hull was respectable, but not spectacular.

Offensive Line: C. There were some strong blocks, but also some protection problems, as both Bosley and Ziemba had trouble with a few 4-man rushes. Penalties on the line continue. Tyrone Green was awfully good, though, pulling on those "wildcat" plays. He blocked two or three guys, on some of those. Consistency and mental errors are the biggest problems with this year's line.

Receivers: B-. Despite four drops, this group blocked ok, and ran good routes. There were some good catches, such as the touchdown to Dunn (which I erroneously credited to Tommy Trott), and the key first down from Burns to Billings. The receivers came up with 17 balls on 29 throws, which is a good day, any way you slice it.

Running Backs: B. These guys are being asked to do it with no lead blocker, and against stacked fronts. Teams really don't respect our passing game. There were no fumbles, and Ben Tate rescued both quarterbacks on a couple of messy handoffs.

Quarterbacks: C+. Yes, we only passed for about 125 yards. However, Todd was pretty sharp in the first half. Kodi Burns was dynamic when he came in, and make no mistake. Tennessee was coming AFTER Burns, with the blitz, and he made plays. The grade falls off with horrible throws in the second half by Chris Todd. A LOT of it had to do with the play calls, but still, the ball must be thrown where the receiver has a chance. The QB controversy is alive and well. I think we'll see both guys, in the coming weeks. Let's hope Coach Franklin sticks with whomever gets the hot hand!

.....If it wasn't evident before, it should be clear now: Late in games, with the lead, Auburn must continue to try to score. We are NOT a grind-it-out running team. Running Tate up the middle to start an obvious run-the-clock drive is only going to waste minimal time, and put us into second and long.

.....Honestly, Auburn did NOT play well enough to win, today, against a quality SEC team. Fortunately, we were facing one of the most disorganized, chaotic Vol offenses I've ever seen. Before the season, I touted Jonathan Crompton's experience. With this Clawson offense, the Vol receiving corps and quarterback never seemed sure of what route to run, or throw. Wasted passes were the order of the day. While the Vol attack had some minimal success running the ball in the first half, the passing was miserable. And finally, who runs a rub screen, on a two-point conversion? You've GOT to throw it into the end zone! There's no second down!

.....For Auburn, this game was a win, and you have to be happy with beating Tennessee! Otherwise, it was a one step forward, one step back effort. Next week, the Tigers travel to Nashville, to face a rested, 4-0 Commodore team, followed by hosting a shell-shocked Razorback team at home, that's given up a hundred points in the past week. It never gets any easier, in the SEC! War Eagle, Tigers! And good night!