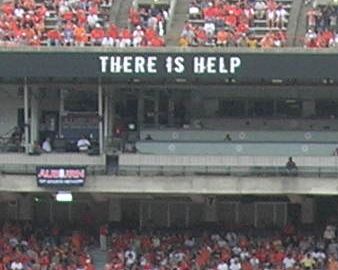 .....War Eagle, everybody! Despite a good victory over the Tennessee Volunteers last Saturday, "dismay" seems to be the watchword of the Auburn faithful. Cries for the head of offensive coordinator Tony Franklin have been loud and numerous. This is probably as dejected an Auburn fan base as I have ever seen, after a win and a 4-1 start. This week, a seeming cupcake visit to Nashville has instead turned into a clash of top 25 teams, as Vanderbilt has shocked the SEC. by opening with a 4-0 record, leading their division at the end of September.

.....The Auburn quarterback controversy, simmering along throughout the past nine months, has re-ignited in the wake of a narrow victory. Chris Todd had a near-flawless first half, managing the game well, and throwing a dart to a wide-open Robert Dunn for a first quarter touchdown. Midway through the second quarter, backup Kodi Burns took the field, to a roar of approval by the Auburn crowd. Todd had missed only one throw, but after a touchdown by the Auburn defense, and a 14-6 lead, the coaches evidently want to shake the Vols up further! Kodi led 'em down the field in dramatic fashion, with some great improvisation. The drive was derailed by two short runs up the middle, followed by a tipped ball/drop on 3rd and 4. Burns went out to a roar of approval, only to watch Wes Byrum miss the field goal attempt.

.....Burns started the second half, trying to build on his success on the abortive field goal drive. Alas, Tennessee was ready. A snuffed keeper, an extremely short throw slammed down immediately, and a sack on third down brought us back to reality. Todd was back in, and how did he do after his cooling-off period? Opened with an overthrow to Billings. Then a short dump to Trott for 2, then a failed read option to Tate, on 3rd down. Tennessee KNEW Todd wouldn' be able to keep it and make 8 yards. Next drive: Opened with a throw into triple coverage, which was SOMEHOW caught by Trott. A good run by Tate, a good swing pass by Todd, a short-yardage hammer for a first down by Eric Smith. Then, a short run by Tate, a drop by Trott, then Todd threw a wounded duck that was picked off. 3rd Todd possession, a short throw to Billings for 3, and a missed screen pass to Fannin on 3rd and medium. 4th Todd drive of the half: a 3rd down pass well short of the first down, to Dunn. 5th drive for Todd: Holding call on a 1st down run to back it up. Todd on a rollout/throwback, missed everything. Wasn't going to fool anyone, on 1st and very long. UT was playing back in zone. A 3rd and long pass down the middle into coverage, knocked down. The boos started on this drive, but Todd really was never given a chance, by the play calls on the last two possessions.

.....Burns finished the game, going back in and immediately running three straight quarterback keepers, for a total of negative two yards. On Burns' second drive, they finally let him throw on 3rd and 5, and he drilled a dart to Billings for a first down, and we were able to run out the clock from that point.

.....What conclusions do we draw from the game's quarterback drama? Being pulled for Burns seemed to affect Chris Todd. He was inconsistent afterwards, throwing up several wounded ducks. For all the cheers for Burns, though, Burns was equally inconsistent. Sure, he hit the dramatic, break-3-tackles 11-yarder to Dunn, and the 10 yard clock killer for the game-winning first down. 2 completions for 21 yards, sez the box score. Aside from those two plays, Burns was 2 of 4 for 15 yards. Overall, Burns managed a pedestrian six yards per pass. It was better than Todd's four yards per pass average, but not significantly so. Bottom line: the play calls, and the lack of Auburn's ability to run the ball against a 4-man front and 3-deep coverage, were what doomed the offense.

.....Ultimately, it's ill-advised to yank a young starter after one bad half, particularly when the calls and the rest of the offense failed as well. Burns deserves more snaps, and should have a chance to run the whole offense. The coaches made the decision they had to make. Todd starts, but we should see Burns some.

.....Auburn should be favored in each game hereafter, till the big clash in Jordan-Hare with Georgia. The offensive coordinator, the quarterbacks and the whole offense are still learning. It's a golden opportunity to rack up some wins, behind a stellar, run-stopping defense, while we sort things out. How 'bout that DEFENSE? War Eagle, folks! Stay behind this team! We still have a very, very good chance for a BCS bowl, this season!

SECond Look, around the Eastern Division: Vanderbilt took a week off to savor their unprecedented 4-0 start, and get ready for Auburn. Kentucky ran their record to 4-0 (but 0-0 in the SEC) by mauling Western Kentucky 41-3. Welcome to the Bowl Subdivision, Hilltoppers! South Carolina downed lowly Alabama-Birmingham, but the 26-13 score was hardly impressive. With an 0-2 SEC start, the Gamecocks are a long shot to even make a bowl game, this season. Georgia crashed back to earth, after being stomped into goo by the Alabama Crimson Tide at home. The final score was respectable, at 41-30, but in reality, this was an ugly, ugly loss. Tennessee is off to a start reminiscent of 2005, 1-3, and 0-2 in the SEC. Admittedly, they could back into Atlanta again, but it's highly unlikely, unless they find some answers. The Vol quarterback situation is the ugliest in the SEC, I think. Florida fell off the division lead, too, failing on an extra point to the upstart Mississippi Rebels at the Swamp, 31-30. The East is wide open, with Vandy leading, Kentucky untested, and wounded Florida and Georgia lurking a game back.

Western Division: The West is powerful LSU's division to lose, at this point, but LSU struggled a bit in a 34-24 win over feisty Mississippi State. Arkansas took a meaningless beating out of conference, getting bombed by Texas in Austin, 52-10. Arkansas currently fields the league's worst scoring defense, giving up 152 points in 4 games, a 38 point per game clip. Mississippi State sunk farther out of the bowl picture, falling to LSU to go 1-4, 0-2 in the SEC. Ole Miss righted the ship, with a shocking 31-30 upset of Florida on the road. The Rebs have equaled their win total from last season with a 3-2 record, and have their first SEC win since 2006. Alabama has likely silenced the doubters, with a convincing 41-30 win over league-leading Georgia, in Athens. As much as it pains this Tiger to say it, the Tide seems to be for real! LSU and Bama lead the West, but Auburn and Ole Miss, and even Arkansas, are only a game back.