Rocker Coming Back to the Plains

Share All sharing options for: Rocker Coming Back to the Plains 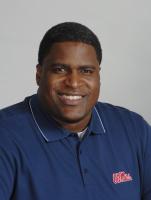 It's official. After a much-publicized effort at attempting to lure Ole Miss defensive line coach Tracy Rocker to come coach under new HC Gene Chizik, Rocker has committed to coming back to his roots by agreeing to join the staff. Rocker, a former Outland and Lombardi winner under Pat Dye in the 1980s, is a solid choice to coach a position where we have always had success. To my knowledge, he'll be the only member of any Auburn coaching staff that will have his own picture hanging in his office, otherwise known as Jordan-Hare.

Mean Gene appears to be making some very discerning choices for his staff one by one and having some success with it, much to the detriment of one Birmingham sports writer. I guess multi-tasking would be what the average coach would do when having to assemble a whole staff. Alas, I guess it's only a matter of time before Saban runs them out of town, too.