Lots Of Weekend News On The Plains

Share All sharing options for: Lots Of Weekend News On The Plains 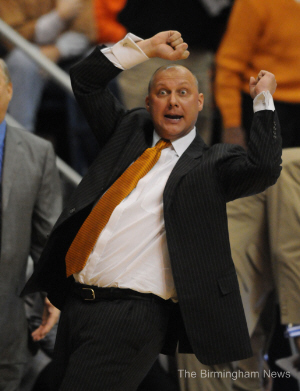 Good Monday morning to you. I hope most of you are reading this from home today and enjoying an extra day off. There was a lot going on in Auburn over the weekend, including the Tigers big 85-71 win over Alabama. After a tough loss to Florida on Wednesday night, it was anyone's guess how Jeff Lebo's team would answer the call against their cross state rival. A crowd of close to 9,000 watched what may be a pivotal win in Lebo's Auburn career.

There's little question that both Lebo and Alabama Head Coach Mark Gottfried are on the hottest of hot seats as the SEC schedule gets into full swing. A loss Saturday would have sent the Tigers to 0-3 in conference play. As I've said many times before, Lebo gets as much out of his players as any coach in the conference. He's just got to find a way to get more talent through the door and then have better luck keeping them on the team.

Recruiting is easier said than done at Auburn. A few months back I asked Lebo about recruiting and he said with the facilities and support the team currently has, it's one of the toughest jobs in the country. "Because of the condition of Beard-Eaves, I don't take recruits to the Coliseum unless they ask," said Lebo. "We try to emphasize other things."

The big question today is whether Lebo can survive until the new arena opens in late 2010. I've always liked Lebo and know he's worked tirelessly to make things better. Let's hope he gets a few breaks down the stretch and improves over last season.

Meanwhile, the women's basketball team is quietly becoming the big story in college basketball. Nell Fortner's Lady Tigers improved to 18-0 yesterday when they defeated Arkansas 70-61 in Fayetteville. They sit at number six in this week's top 25 poll.

A win over Alabama on Thursday will give Fortner's bunch the longest winning streak to start a season since the 1986-87 campaign. Following Thursday's home game against the Tide, Auburn welcomes 15th ranked Tennessee to the Coliseum on Sunday. Fortner is without question one of the top coaches in college basketball. What's she done in a few short years is nothing short of miraculous. If you are looking for something to do this week and live close to campus, be sure to check them out.

If Auburn football coach Gene Chizik is half as good at recruiting players as he is coaches, then he has a bright future indeed. He continues to assemble what can only be described as one of the best staff's in the country. Yesterday, Chizik announced the hiring of Colorado offensive line coach Jeff Grimes as Auburn's new o-line coach. Chalk up another big hire for the first year coach.

"I'm very excited about coming to Auburn, working for Coach Chizik and joining the tremendous staff that he has put together," Grimes said. "As coaches we are competitive and love challenges and I'm looking forward to coaching with, and against, some of the best players in the country.

"I can't express enough how excited I am about coming to Auburn right now at this time," he added. "I'm thrilled about the opportunity and excited to help build something great."

Grimes has spent the last two seasons in Boulder. Before that, he spent three years as line coach at BYU and another three seasons in the same job at Arizona State.

Speaking of recruiting, Auburn picked up a much needed quarterback commitment Sunday when Leroy, Alabama quarterback Clint Moseley picked the Tigers over several other schools. This year's Mr. Football in the state of Alabama, Moseley passed for 8,413 yards and 79 touchdown passes during his career. Auburn also picked up another commitment on Sunday when offensive lineman John Sullen of Auburn picked the Tigers.