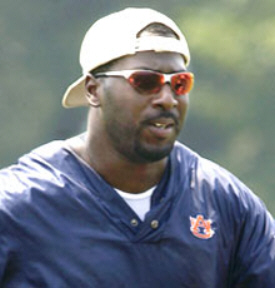 Hit the road James and don't come round here no more...

When Nick Saban left Michigan State in 1999 he took one assistant coach with him to LSU. In the last year, three assistants have left Saban and the Alabama program to take lateral moves to other schools.

Saban is a fine football coach. That's fact. What's also fact is that he's hell to work for. Fans love him. Coaches on the other hand, stay a year or two and then leave. That's what makes the defection of former linebacker coach and Auburn graduate James Willis to Alabama so puzzling.

As with most negatives at Auburn these days, all fingers are again pointing at athletic director Jay Jacobs. Sources say that Willis was paid his severance (through June of this year) after Gene Chizik initially decided against keeping the former Tiger linebackers coach. When Chizik rehired Willis, Jacobs asked for the severance money back. This action, along with the fact that Chizik didn't keep him on staff from the start, is said to be the reasons behind his departure to Alabama.

There are two schools of thought on the severance pay. On the one hand, Willis did return to Auburn within days of his dismissal; so he should be obligated to pay back the money. On the other hand, he was terminated under the original agreement and thus believed he was rightfully owed the money regardless of whether he returned or not.

Considering that Jacobs and Chizik are paying position coaches more than $400,000 annually, it seems to me this would be a small investment to keep one of my top recruiters. Then again, Jacobs pretty much hand delivered Will Muschamp to Texas because of a few football tickets to the Chick-Fil-A Bowl.

With all of that said, the move by Willis remains puzzling. Why would someone who's so beloved by Auburn fans and has so much invested in the University and the football program leave for Alabama two weeks before signing day? Willis is still regarded as one of the best linebackers in Auburn history. He led the team in tackles during the 1990 and 1992 seasons. He was named All-SEC his senior year.

He was understandably upset with Jacobs and Chizik. That part, most fans get. But by leaving for your archrival at such a critical time in the year guarantees that Willis will forever be in exile from the place that he was once so loved. Had he left for Tennessee or Florida or even Georgia, it would have been much easier for Auburn people to forgive him down the road.

Today, Willis finds himself sitting in northwest Alabama as just another assistant coach. The first time his linebackers under-perform or he misses out on a prize recruit, he'll simply be referred to as that sorry coach from Auburn. He's now working for a guy that goes through assistants like Auburn goes through money.

This weekend he'll be the toast of the town in Tuscaloosa - the guy who gave Auburn another black eye. But what will become of Willis a few years down the road when he's either fired or realizes working for Saban is not worth the toll it takes on his family?