Share All sharing options for: Ding Dong, the Wicked Witch Is Dead! 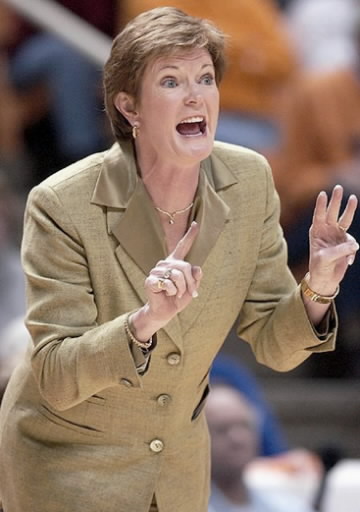 The First Lady of women's basketball had a rude welcome, at the Beave!

War Eagle, everybody! On a foggy January afternoon on the Plains, the Auburn Tigers have THRASHED the University of Tennessee  Volunteers, 82-68! Led by senior Dewanna Bonner's 35 point explosion, the Tigers bombed the Vols, building a lead as large as 24 points, before a late Vol comeback. The Tiger faithful were out in full force, filling the old Coliseum beyond capacity. The crowd of 12,067 is a record, folks!

Auburn came into the game on a 16-game losing streak to Tennessee, having last won in 1997. Auburn had not beaten Tennessee at home, since 1991! Auburn has NEVER beaten the Lady Vols by double digits, before! With the victory, the Tigers take the undisputed lead in the SEC race, and are a lock for the NCAA Tournament.

The story of this game was the pair of "Killer Bees," Dewanna Bonner and Whitney Boddie. The pair combined for 10 steals, 14 rebounds, and 52 points. The stifling Tiger defense forced 23 turnovers, and limited Tennessee to 47.3% from the floor, only 30% from behind the arc.

With the victory, the number 6 Tigers go on a pivotal two-game road swing this week, visiting the tenacious, slow-down Georgia Bulldogs on Thursday night. A Sunday afternoon tilt in Baton Rouge follows. Auburn now has 20 wins, and NO losses. It is the best Tiger start since Joe Ciampi's 1989 team!

War Eagle, and kudos to the Lady Tigers! Certainly kudos also, to CSS , for putting this entertaining matchup on TV!