Talk of the Town!

Share All sharing options for: Talk of the Town! 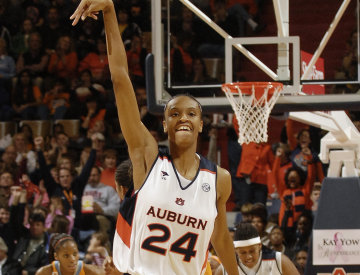 Bonner and the Gang give Auburn fans something to cheer about.

Sometimes good news comes from unexpected places. For Auburn fans, the past few months have been some of the most painful in school history. The reckless work of an incompetent athletic director and a clueless school president has left Auburn people looking for something good to cheer about.

Sunday afternoon they found the remedy in Nell Fortner's Lady Tigers. Before the largest crowd to ever watch a basketball game on the Plains, Auburn's women defeated tenth-ranked Tennessee 82-68, to improve to 20-0 and snap a 16-game Volunteer winning streak.

More than 12,000 fans crammed into Beard-Eaves Coliseum, beating the old women's attendance record by 5,000 people. To accommodate the crowd, Auburn officials had to quickly remove the curtains covering the upper level to free up 1,500 additional seats. Along with top-ranked Connecticut, the Lady Tigers remain the only other unbeaten team in Division I-A.

The sixth-ranked Tigers put a beating on Pat Summit's team that was much worse than the score indicated. DeWanna Bonner, who may be the best college player in America, piled on 35 points against the Vols. With four minutes left to play, the Tigers led by 24 points before Tennessee tightened things down the stretch. There's little question today that Auburn is back among the elite in college basketball.

Speaking to a group of Auburn alumni last fall, Fortner said she dreamed of one day being able to fill up Beard-Eaves Coliseum. She talked about standing on the sidelines at Jordan-Hare Stadium during a football game and looking into the stands and thinking about the impact it would have on her program if she could draw just one-tenth of that crowd.

Through hard work and belief, she got that and more yesterday. Fortner hasn't used the facilities at Auburn as an excuse to lose. She doesn't walk around saying things will get better when the new coliseum is built. Nell Fortner doesn't make excuses. She's literally built the program from the bottom up and made it a winner.

While the men's basketball program has remained stagnant or worse over the past four years, Fortner has taken the women's program to heights not seen since the late 1980's. She owns recruiting in the state of Alabama in a way that Jeff Lebo or Gene Chizik can only dream.

Spend 10 minutes talking to Fortner and you'll see why she's so successful. She has a smile that's contagious and a personality that's as down home as her Mississippi upbringing. I asked her why, with her solid coaching credentials would she consider coming to a place like Auburn that's never really supported men's or women's basketball.

"I was at the beach in Florida years before coming to Auburn and I was talking to a legend in the game, seeking some advice about my future," said Fortner. "This person told me that if the Auburn job ever came available, I should go after it. They said it had all the ingredients to be contender every year - location, in-state talent, everything. I never forgot that, and so when the job came available I knew it was the place for me."

Fortner felt so strongly about Auburn that she turned down Southern Cal to take this one. A self described beach bum, Fortner seems to be in her element at Auburn. She owns a beach home on the Gulf Coast and now has not only the college basketball world, but more importantly, Auburn fans talking about her Lady Tigers.

Talk about a feel good story. This weekend has been good medicine for all of us Auburn fans. And who would have thought we'd be here today talking about women's basketball at Track'em Tigers? Who says Auburn people will never support basketball? They just want to see good basketball. And you don't need a $100 million facility to make it happen. Ask Nell Fortner.