Share All sharing options for: Hood and Dansby Carry The Auburn Banner In Sunday's Super Bowl 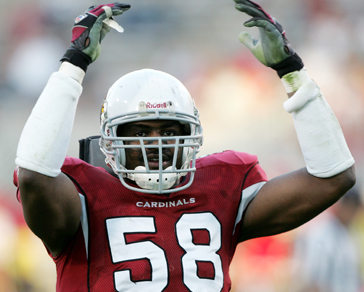 Will it be Auburn or Woodlawn High School on Sunday?

If you're like me, come Super Bowl Sunday you are usually pulling for the team with the most former Auburn players. If that's the case Sunday night, you'll want to pull for the Arizona Cardinals. Two former Tigers will be in the starting line-up for the NFC champions.

Defensive back Rod Hood and linebacker Karlos Dansby both need big games if the underdog Cardinals are to have any chance against the Pittsburgh Steelers. Meanwhile, another former Tiger, offensive guard Kendall Simmons is on the injured reserve list for Pittsburgh after tearing his Achilles tendon last September. Auburn has had at least one player represented in 25 of the 43 Super Bowls played.

Hood is one of the Cinderella stories of the NFL. He went to the Philadelphia Eagles camp in 2003 as an unsigned free agent. He quickly made a name for himself around the league and parlayed that effort into a five-year $15 million contract with the Cardinals two seasons ago.

Hood is also a great person off the field. The Columbus, Georgia native regularly returns to his hometown in the off-season to put on camps for local kids. Playing in his sixth season, he recorded 40 tackles with one interception during the regular season. This marks Hood's second Super Bowl appearance.  He also played in Super Bowl XXXIX while in Philadelphia.

Dansby has had a close-up view of the rebuilding of this down and out Arizona franchise. He's spent all five of his NFL seasons with the Cardinals. And it's not a stretch to say that much of their success is a result of Dansby's play. He led Arizona in tackles this season with 119 stops, which ranks 14th in the league. He also had four sacks, two forced fumbles and two interceptions. Dansby has been even better in the post-season, grabbing 23 tackles during the past three playoff games.

If there's one knock on Dansby it's that every time he's given an opportunity to introduce himself on television, he identifies his school as Woodlawn High School (in Birmingham). I'm really not sure why he snubs Auburn, but I know it hacks a lot of fans off. I've watched him do it in every playoff game this year and you can bet he'll probably do it again if given the chance Sunday. If you ask me, it's downright ungrateful. He needs to remember the place that gave him this opportunity.

Pittsburgh enters the game a seven point favorite. More than 100 million viewers are expected to tune in from around the world. Kickoff is set for a little past 5 p.m. CT on Sunday. The game will be carried by NBC with coverage beginning at 8 a.m. CT. I'm not kidding.

Have a great weekend and go Cardinals!