Things Are Moving Fast On The Plains

Share All sharing options for: Things Are Moving Fast On The Plains 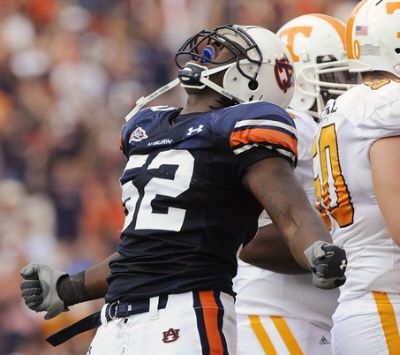 Chizik landed his biggest recruit when Coleman decided to return.

In a lot of ways today marks the start of the New Year. Everyone is now back at work and in their familiar routines - for better or worse. As expected, the weekend was extremely busy for Auburn and Gene Chizik.

The new coach continues to make progress in filling out his staff and landed his biggest recruit to date on Saturday when All-SEC Defensive End Antonio Coleman committed to finishing his senior year at Auburn.

"After coach (Tuberville) got fired, that pushed a button in my head and I was leaning toward coming out," Coleman said. "I talked to coach Chizik again a couple of days ago and I believed every word out of his mouth. I want to be one of the guys that turns it back around at Auburn."

Most NFL draft experts peg Coleman as a late second or early third round selection in April's draft. Coming back should benefit both Coleman and Auburn. He got his degree last month and with that behind him, can focus almost solely on football while taking a few graduate classes.

Coach Chizik made his fourth hire yesterday when he announced that former Iowa State Special teams Coach Jay Boulware would take over the same position on the Plains. "I've had the good fortune of working with Coach Chizik the last two seasons and I am thrilled to be joining his staff at Auburn," Boulware said. "Auburn has a wealth of history and tradition and combined with the outstanding staff Coach Chizik has already put together with Gus Malzahn, Curtis Luper and James Willis, I can't wait to get started."

Here's more info on Boulware from the Iowa State website:

Boulware coached at Texas, Northern Illinois, Arizona, Stanford and Utah before coming to Iowa State. His Ute special teams were Mountain West Conference leaders. The Utah kickoff return unit paced the Mountain West Conference in 2006. Utah earned a bid to the Emerald Bowl in 2005, beating Georgia Tech 38-10. Boulware helped coach the Utah team that received a bid to the 2006 Armed Forces Bowl, in which it beat Tulsa 25-13.

His players have earned national honors and gone onto the NFL.  At Northern Illinois, he recruited future All-American and current Atlanta running back Michael "the Burner" Turner.  During Boulware's tenure at NIU, the Huskie offense ranked 12th nationally in rushing as two-time all-MAC offensive lineman Ryan Diem moved on to the NFL, where he plays for the Indianapolis Colts. Arizona recruited Boulware to the Wildcat program where he coached tailback Mike Bell, an all-Pac 10 performer who now plays for the Denver Broncos.

Chizik's target now is Oklahoma State Co-Offensive Coordinator Trooper Taylor who has a reputation as one of the top recruiters in the country. He arrived in Auburn yesterday along with new running backs coach Curtis Looper who previously held the same position in Stillwater.

A Baylor graduate, Taylor has been with the Cowboys only one season. He made his reputation as a top recruiter while working for Tennessee and former coach Phil Fulmer. He's also worked on the staff at Tulane.

When athletic director Jay Jacobs said money would be no object, he apparently wasn't joking. Reports indicate that Luper will be paid $400,000 annually to coach the running backs. That's $172,000 more than he made this year at Oklahoma State and on par with what most offensive coordinators make in the SEC. There have been no figures released on the salary of offensive coordinator Gus Malzone.

While Auburn fans seem to be warming somewhat to Gene Chizik, you have to wonder why Jay Jacobs didn't at least show some interest in Utah coach Kyle Whittingham. Much of the credit for the Utes upset win over Alabama has to go to Whittingham and his game planning.

The Utah defensive unit made Bama's offense look like they were running around with cement in their cleats. Friday night's win was no fluke. I'm convinced Whittingham's team would beat Alabama again if given a chance. Don't get me wrong, I'm not knocking Alabama. They are still one of the best in the country. But we did learn that speed can whip size if done right.